I want you to write about writing and how you’ve made it a habit.

Thanks Joe! I think the How is a lot easier to answer than the Why, so I will just focus on that here and discuss “Why I Write” in a future piece. As for the How - I call it Mise en Place Writing.

a French culinary phrase which means “putting in place” or “everything in its place”. It refers to the setup required before cooking, and is often used in professional kitchens to refer to organizing and arranging the ingredients (e.g., cuts of meat, relishes, sauces, par-cooked items, spices, freshly chopped vegetables, and other components) that a cook will require for the menu items that are expected to be prepared during a shift

The idea is that cooking is faster, easier and more enjoyable if you have all the stuff you’ll need to do prepared beforehand. It’s basically all the fun parts of cooking separated from the boring parts. If you’ve ever had the chance to do a cooking class in a foreign country (A great way to appreciate local cuisine in personal travel or team retreats), notice that it’s fun because all the prep is done for you.

Of course, for chefs, typically you’re also the one doing the prep so you’re not really saving any work. But it can be nice to break work up into more palatable (pun intended?) chunks of “prep” vs “cook” instead of “Prep & Cook”. In fact, if you prep early, you also get a chance to spot missing ingredients that you’ll need, and be able to run out and get them, rather than discovering that you don’t have them while cooking (!).

What’s true for chefs is even more true for writers. The actual act of writing is only the final assembly stage of a longer, more involved process. Instead of grocery shopping (or stocking up), chopping, measuring, cutting, peeling, slicing, we have ideation, research, peer review, audience testing, reframing, illustration, organization, and more.

That’s a lot of continuous time dedicated to just one thing - rare in today’s attention economy. If I were to add to that ideation and research and organization and so on, it’d take even longer, and I’d do a poorer job of it. Ironically, this is the stuff that actually has high leverage on what readers will take away from what I write. So I should spend more time on that. 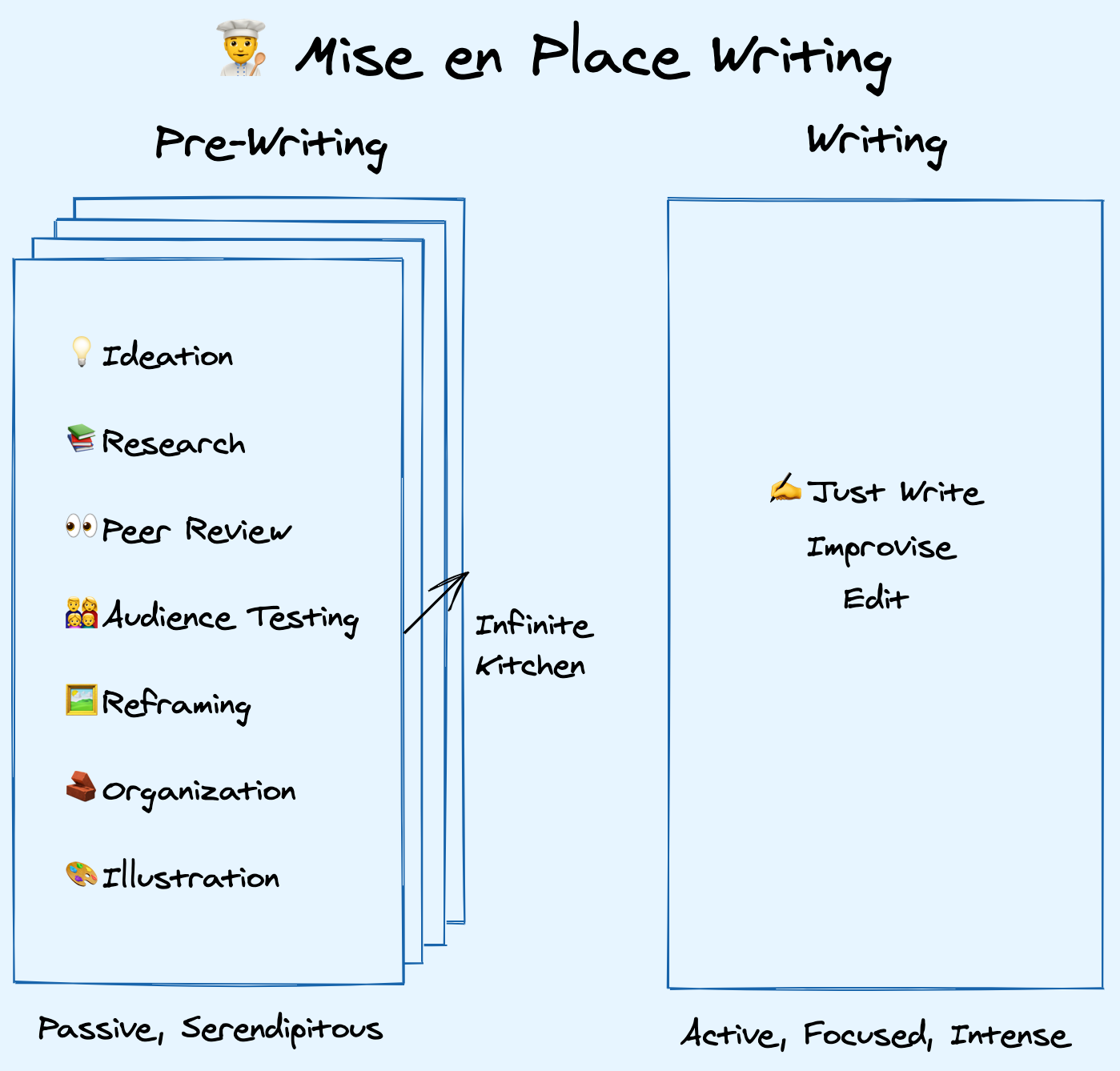 As you can see, there’s a lot that you can do to improve your writing before you write. We should have a separate workflow for pre-writing.

First, make sure you have a cross platform note-taking tool - I evaluated Evernote, Notion, Roam Research, and SimpleNote, but currently am using OneNote because it is free forever with the backing of Microsoft, and has good offline support. I might move to Joplin in future, or write my own. It’s not really about the tool - at my scale, it’s trivial to switch tools - but the feature set needs to support the workflow.

It has to be easy and fast. I don’t know about you but I can forget ideas in minutes. If I don’t write it down it might be gone forever. I’ve been known to jump out of the shower dripping wet just to go write something down.

Each note you make is a little kitchen, and you’re assembling the pieces in place for a future you to come in and just get to cooking.

Screw struggling to come up with 1 blogpost a month. You’re now simultaneously preparing 50 blogposts at once. You’re adding ingredients as they come in, you’re chopping them up, rearranging, taste testing, noting what you’re still missing, throwing entire kitchens out, smashing two kitchens together.

I’m currently writing one post a day. It’s a high bar - most people don’t have the luxury. It also means the quality of my writing is pretty much limited to what I can do in 1-5 hours - not anywhere close to what people can achieve with a sustained 20-100 hour effort on a monster skyscraper or even a book. So I don’t intend to keep it up forever.

Each day, I go through my growing list and think about what is the most interesting thing I could write about that day. The nice thing about having a groomed backlog is that all the related links and notes and thoughts from myself over time is collected in a list ready for me to flesh out into a full piece. It’s just less intimidating that way. But there’s also a little dopamine hit from this concentrated dosage of inspiration from all my past selves who have sent this message into the future.

You don’t have to write once a day, it’s a stupid goal to aim for and I don’t really know why I do it apart from the challenge. But you can probably see how this workflow adapts to writing at any frequency. Once again, the key insight of Mise en Place Writing is that we should decouple writing from pre-writing. With that, our writing improves, as well as our enjoyment of writing.

With all that work done pre-writing, I might be giving you the impression that I am strictly separating everything all the time and I don’t deviate from the plan once I enter Writing Mode. Not true. Writing Mode is another opportunity to re-experience the pre-writing and the writing job all at the same time, just with the benefit of some extra prep that I’ve done before hand.

A lot of people put heavy emphasis on editing. I agree that it can add a lot of value. But I don’t do a lot of it. For one thing, I don’t have a ton of time. For another, I find it often doesn’t add as much value as hoped. You can run things by Hemingway or Grammarly but they are no substitutes for human judgment. Finding a good editor is harder than just grabbing a coworker, but that’s what a lot of people do and accordingly they don’t get the same value as a good editor would.

I wish I had more insights here but I just don’t have a ton of experience with editing. I will say that I edit my posts a lot after publication - they are all intended to be living documents in a Digital Garden - so if something doesn’t read quite right or someone chimes in with a crucial thing I overlooked, I will go change it. But usually, it’s more important to err on the side of getting it out there rather than be bogged down in heavy editing, especially when it can be edited post-publication.

I don’t have an idea for a strong ending, so I’ll just end with some notes.

I am strongly influenced by the thinking of Tiago Forte’s Building a Second Brain and David Perell’s thoughts on Writing.

I’m not trying to build a brand about anything, which is a weakness and an advantage at the same time.

In terms of Learning Gears, I’m very much in Explorer mode right now. But when I need to switch to Connector and Miner, I know how to pivot.