Musing about how Twitter can enhance your Internet reading experience #reflections

Twitter has enhanced my Internet experience in 2 similar ways recently - Webmentions and Twitter Links. I think these things point toward something we want as part of the permanent fabric of the social Internet.

I've written previously about the Indieweb Webmentions movement, which you can see at the bottom of most posts on my site.

The Indieweb movement has a strong "stick it to the man" vibe, but unfortunately it takes a lot more work for a lot poorer quality experience. So a compromise is to use Twitter as a basic auth/microblogging source that everybody can use.

So far, the Bridgy service has had some bugs and doesn't support backfill, but otherwise, I think it's great! It lets me, the author, add some social proof and interaction, but lets readers and commenters post on something they "own" and the conversation easily continues off-page for me and other readers. In a very small way, it lets my blogposts come alive.

More recently, I've been enjoying Internet-friend Maxim Leyzerovich's Twitter Links Chrome Extension. It's so simple - while you're reading something interesting, you can hit the extension and it puts that URL into Twitter search!

This lets you a) easily find the creator if they are on Twitter, or b) see what others are saying about it. 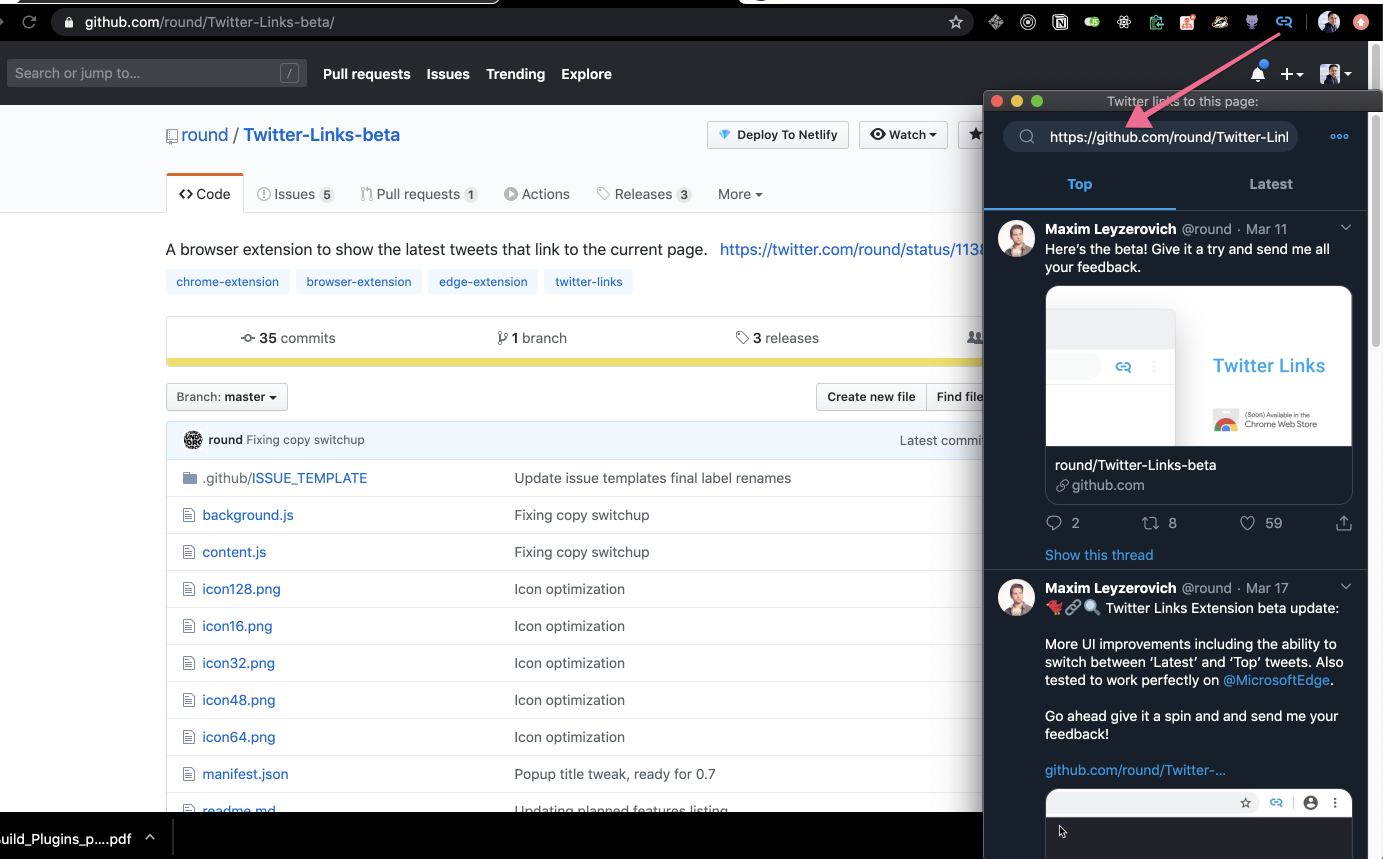 This is like Webmentions on demand, with no crawling service needed and built in social interaction.

If you've read my thoughts on First Principles Thinking, it might seem surprising that I also am a fan of Meta-Commentary.

It's true, there's probably too much of "let the reactions tell me what to think" on the Internet. But that's valid when I don't have the context and knowledge to know any better myself.

Additionally - once I've read something and have a First Principles™ take - it's still helpful to see reactions of others, read anything else they might bring up, and interact with them directly.

What is unique about this is that this is uniquely human. There are no personalized algorithms for you to fall down your own personal rabbit hole. You have to engage with real people, on their terms, and put your own identity on the line as you go.

Visa Veerasamy made Twitter his entire notetaking system - see how he reads books in a threaded style, and indexes his own Tweets.

Not everyone is familiar with the idea of the Metaverse - because it's mostly used in the context of virtual reality - but my broad interpretation of its essence is that it is the ideal form of a decentralized Internet - where you can seamlessly hop from world to world to world, instead of having everyone being centralized on one of 3-5 platforms.

Of course, the irony of using Twitter, a centralized platform, to achieve a decentralized goal of the Metaverse, is not lost on me. However, the experience is simply better than all decentralized alternatives (like Mastodon) right now (since the primary feature of any social network is the people already on it). My bet is that Twitter's own decentralization will succeed.

But the core reason why Twitter works as the base layer for Universal Meta-Commentary is because the format is so constrained. It is unstructured text, but you can build the Metaverse atop linked URLs - the coolest feature of the web - and lets you add some images and text, and that's it. If you want more, you'll have to thread it, or blog off-site. In the meantime, you're forced to crystallize your thoughts to a short statement. Twitter is AMP for thoughts.

I think we can build a lot more Meta-commentary and Metaverse tooling with a Twitter or Twitter-like layer as the natural link between worlds.