5 TILs about Node.js Fundamentals from the Node.js Design Patterns Book

I started reading Node.js Design Patterns this week. I got the Third Edition, and have not spent any time looking into what's changed from prior editions. The first 6 chapters cover fundamental knowledge, before getting into the meaty named Design Patterns, so these notes are from that first "half" of the book.

1. libuv and the Reactor Pattern

libuv is something I've often heard about as a low level Node.js library, but now I have a glimpse of what it does for us. As the book says:

Libuv represents the low-level I/O engine of Node.js and is probably the most important component that Node.js is built on. Other than abstracting the underlying system calls, libuv also implements the reactor pattern, thus providing an API for creating event loops, managing the event queue, running asynchronous I/O operations, and queuing other types of task.

The Reactor pattern, together with demultiplexing, event queues and the event loop, is core to how this works - a tightly coordinated dance of feeding async events into a single queue, executing them as resources free up, and then popping them off the event queue to call callbacks given by user code. 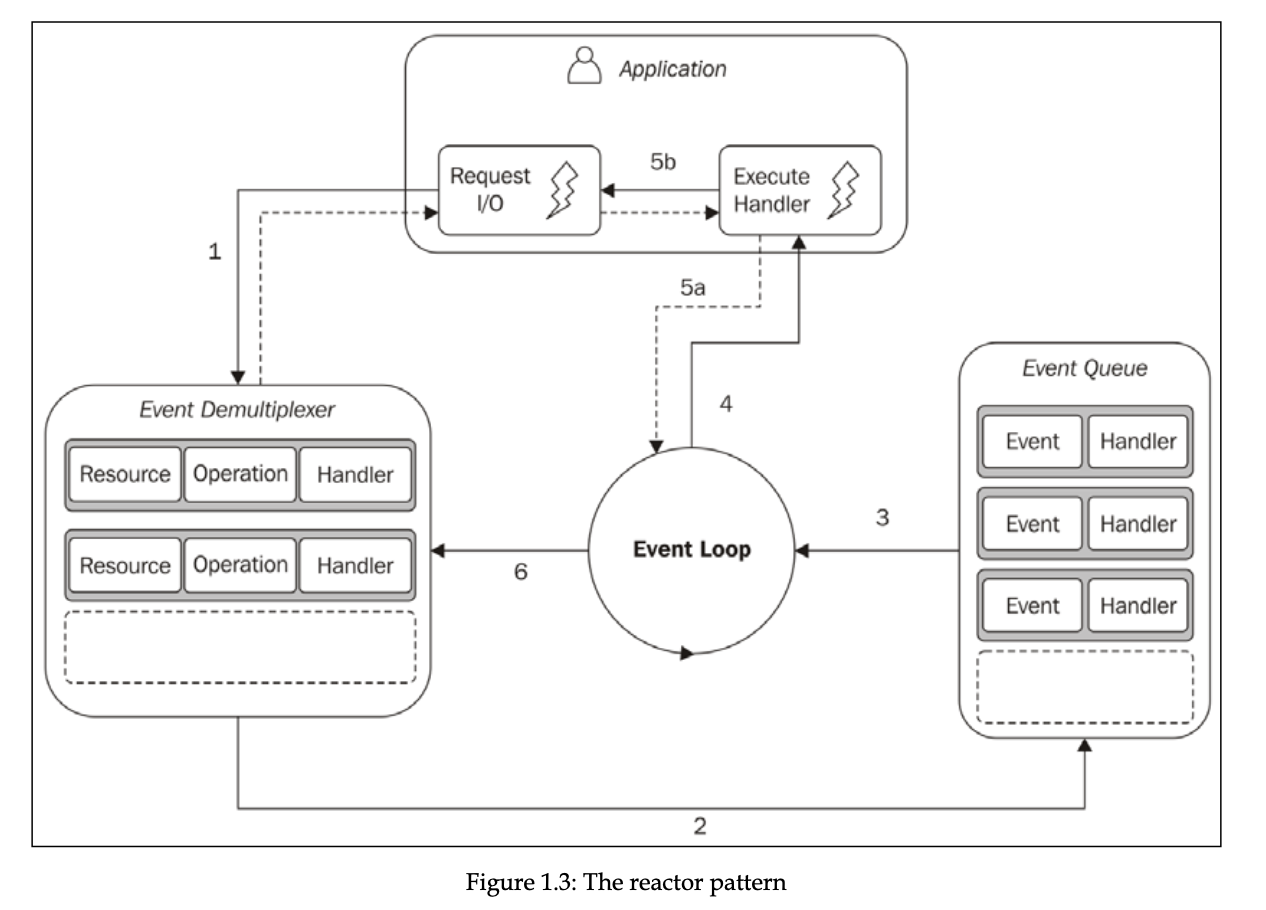 I am superficially familiar with the differences between CommonJS modules and ES Modules. But I liked the explicit elaboration of 5 module definition patterns in CommonJS:

In ES Modules, I enjoyed the explanation of "read-only live bindings", which will look weird to anyone who has never seen it and has always treated modules as stateless chunks of code:

This mutable module internal state pattern is endemic in Svelte and Rich Harris' work and I enjoy how simple it makes code look. I don't know if there are scalability issues with this pattern but so far it seems to work fine for ES Modules people.

The last important topic I enjoyed was ESM and CJS interop issues. ESM doesn't offer require, __filename or __dirname, so you have to reconstruct them if needed:

ESM also cannot natively import JSON, as of the time of writing, whereas CJS does. You can work around this with the require function from above:

Did you know that? I didn't!

APIs are usually either sync or async in Node.js, but TIL you can design APIs that are both:

This looks innocent enough, except when you use it as async and then sync:

This is because module caching in Node makes the first call async and the second call sync. izs famously called this "releasing Zalgo" in a blogpost.

You can keep Zalgo caged up by:

The same line of thinking can also be done for EventEmitter Observers as it is for Callbacks.

You can combine both the Observer and Callback patterns, for example with the glob package which takes both a callback for its simplier, critical functionality and a .on for advanced events.

A note on ticks and microtasks:

It's easy to spawn race conditions and accidentally launch unlimited parallel execution bringing down the server, with Node.js. The Async library gives battle tested utilities for defining and executing these issues, in particular, queues that offer limited concurrency.

The book steps you through 4 versions of a simple web spider program to develop the motivations for requiring managing async processes and describe the subtle issues that present themselves at scale. I honestly cant do it justice, I didn't want to just copy out all the versions and discussions of the web spider project as that is a significant chunk of the book, you're just gonna have to read thru these chapters yourself.

I've often commented that Streams are the best worst kept secret of Node.js. Time to learn them. Streams are more memory and CPU efficient than full buffers, but they are also more composable.

Each stream is an instance of EventEmitter, streaming either binary chunks or discrete objects. Node offers 4 base abstract stream classes:

izs recommends minipass which implement a PassThrough stream with some better features. Other useful stream utils:

Although the authors do recommend that piping and error handling be best organized with the native stream.pipeline function.