What MAGA hats and NFT PFPs have in common

Disclosure: This is a politics blogpost done late on a Friday night whim, I am obviously not a politics expert and haven't rigorously thought through my views on every matter expressed here so I may not be able to defend them under scrutiny.

Society is splintering in an unacceptable way and I have a metaphor for it.

Imagine, as developers often do, a “stack” of the systems, beliefs and things we use in daily life. List whatever items you feel like, but sort them by some measure of Maslow’s hierarchy from base needs to self expression:

You can plot the political-social divide along these dimensions: 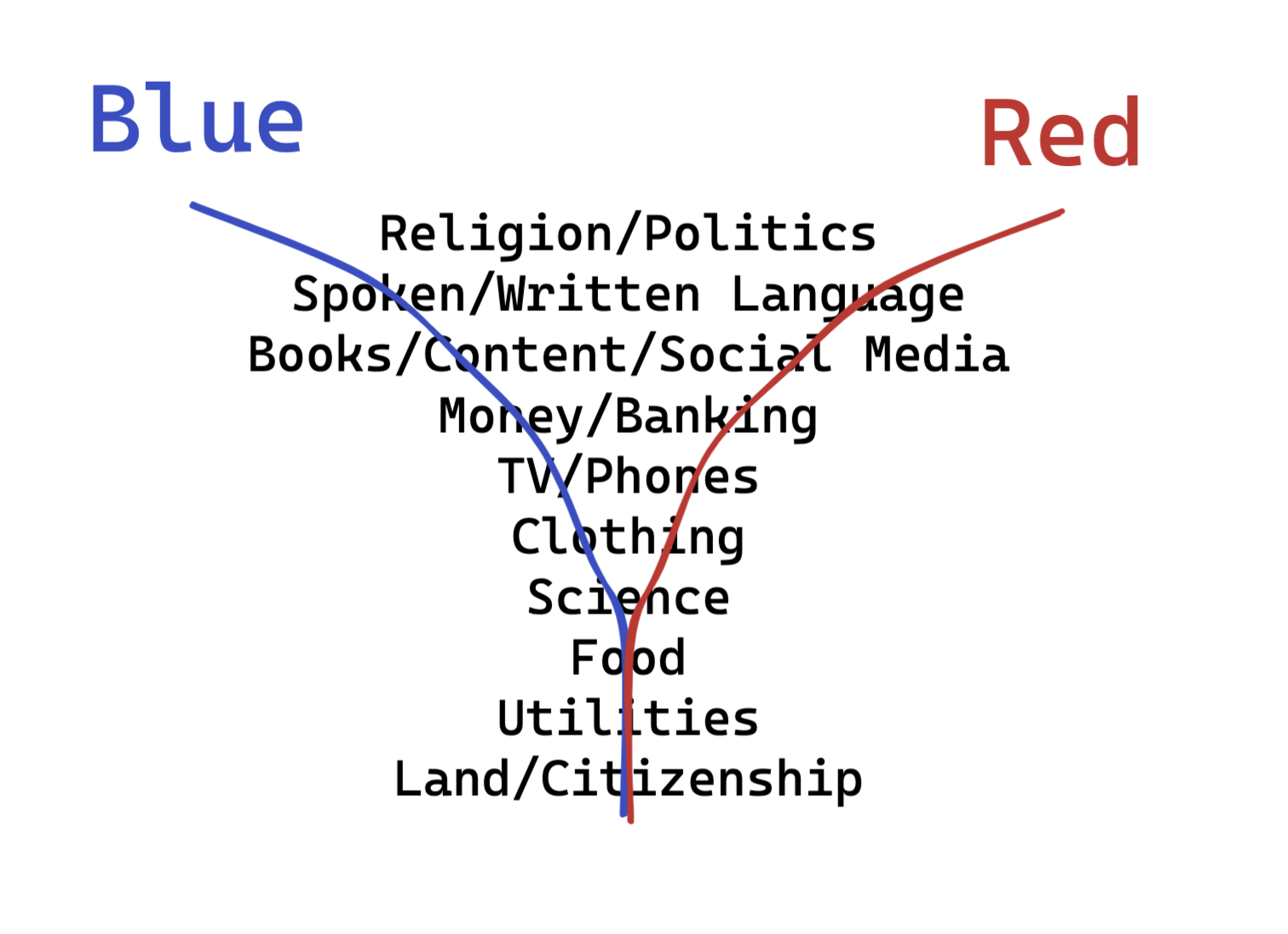 This accurately describes everything from Fox News vs MSNBC, to Truth Social vs Twitter, to Masks vs MAGA hat, even to different interpretations of established Science.

I used to think that this was where the social divide ended. And then the Crypto culture wars started. 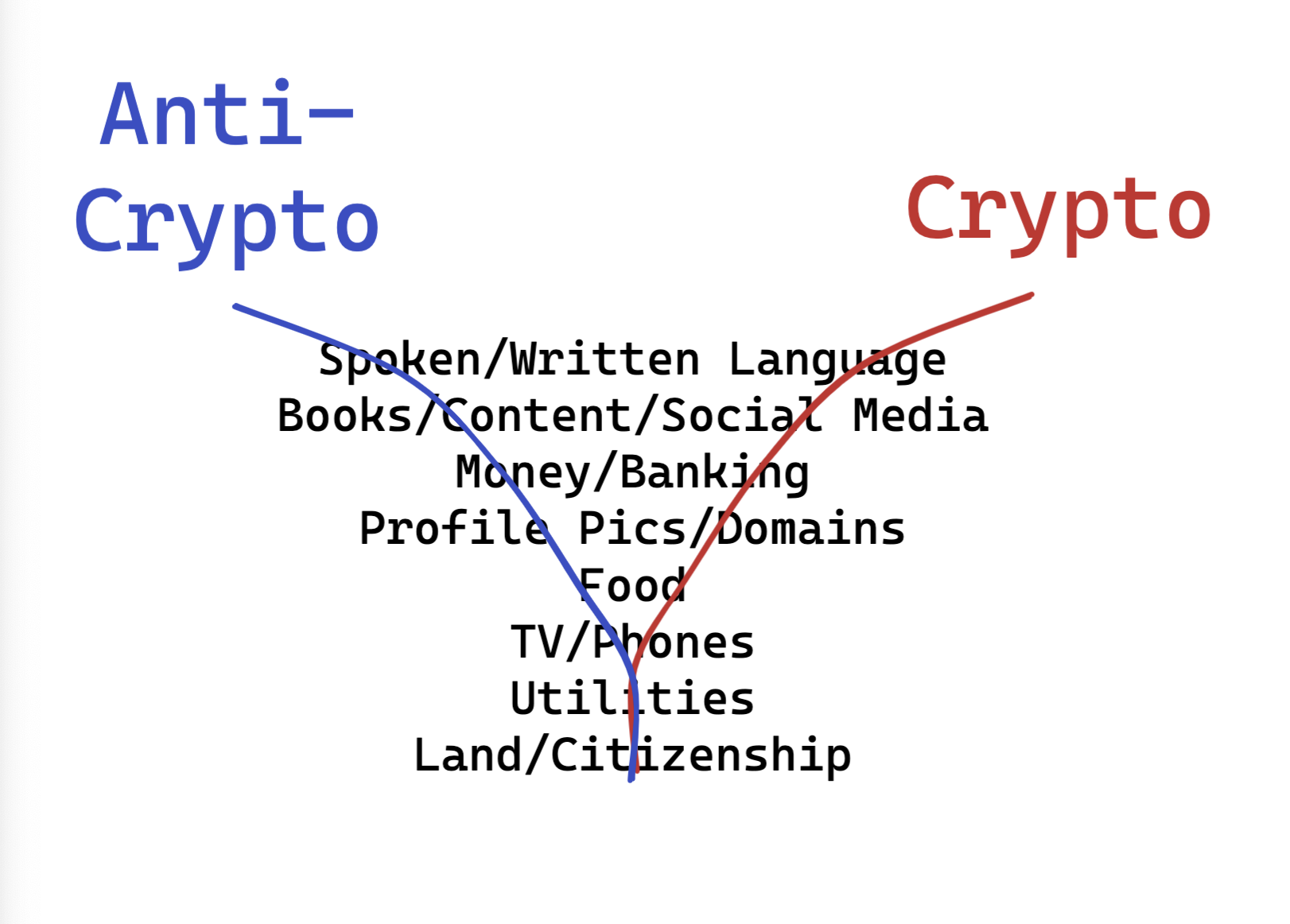 This accurately describes: “gm” and “ser”, The Block vs Bloomberg, TradFi vs DeFi, .com vs .eth, and even disrespecting seed oils and making crypto phones.

Where the red and blue lines join is the “zip” of society. The current layer at which both sides agree to set aside their differences and not go to war.

As divides strengthen over time, due to technological filter bubbles and increasing demonization of the other, society continues to break down by splitting along the divides in lower and lower parts of the stack. The zip slides down. The Red App acquires a Red Cloud. The Crypto Chain makes a Crypto Phone.

The last thread tying society together is our physical proximity and legal identity as citizens. Balaji’s Network State is the latest attempt at tugging loose the final zip on society, making it come undone. The final step is civil war or secession.

Note to reader: The above was the main idea and body of the post. Everything that follows is extra context and discarded drafts that expand upon thinking because it is likely that one of you will ask.

I remember the day the American Dream ended for me.

It was November 8, 2016. I was a product manager and part time head of the New York office for the startup I worked at. We had a very liberal ops person who was taking her day off in the tiny home-office we had, dialling for Hillary. I remember her cajoling, pleading, begging passionately and bravely with complete strangers on the phone to vote. I of course knew that people did phone banking, but it was my first time actually seeing someone do it in front of me. As I was heading out, I asked her why she did it, slightly bemused. “Because he could win,” she answered. The forecasts had Hillary at like a 90% (I don’t remember the exact forecasts) at the time. I chuckled at her characteristically overanxious nature and left for the day.

As the results rolled in that night, I remembered being very afraid. There was some physical fear - I remembered the Philadelphia crowd taking the streets, flipping cars, and so on when Obama won, and that was a happy crowd - but the more overriding fear was that I was no longer in the America I had crossed the globe to build my life in. Of course in retrospect I learned that NYC was the bluest of blue bubbles, and being part of the coastal elite virtually guaranteed I both was ignorant and didn’t care about what was going on in the other states. But that sheer disconnect frightened me.

We’ve all seen the charts of Congress splintering over time (kudos to the mad geniuses who work so hard at quantifying politics):

This observation is well known in the study of elected offices, but it is much less understood in society. What November 8 2016 did for me was wake me up to the widening divide in society.

Over the next 6 years we’ve seen sharp divides based on housing, immigration, race, guns, abortion, masks, cryptocurrency and so on. It feels like chaos. It feels like the end of civilization. A common joke on Reddit is that humanity peaked in May 2016 when Harambe the Gorilla was shot.

After quite a lot of reflection I feel like I have a mental model for understanding what is happening, what might happen, and what we could try to prevent happening.

The Importance of the Society Stack

Imagine, as developers often do, a “stack” of the systems, beliefs and things we use in daily life. List whatever items you feel like, but sort them by some measure of Maslow’s hierarchy from base needs to self expression:

You’ll notice that I included some weird items in there, like “Language” alongside “Clothing” (including sneakers). That’s on purpose.

The Tower of Babel is the most literal interpretation of this idea. Working together, humanity could build a tower that could reach the gods. But without a shared language, they stopped being able to understand each other and failed. Modern left-wing and right-wing people signal their affiliation with word choice as well, and are equally incapable of understanding each other (this is complicated; care must be taken to avoid false equivalence).

Almost every culture has some concept of “dinner table topics to avoid” - no religion, no sex, no politics, etc. Those are very loosely understood to be unacceptable differences - an implicit acknowledgement that as long as we agree on the lower things, I can still break bread with you as long as we never talk about our differences on the higher level things.

There is huge variation in this from table to table of course. But there are many versions of acceptable/unacceptable topics on which to base action - Title VII of the Civil Rights Act of 1964 prohibits discrimination based on race, gender, sexual orientation, and religion, but not political affiliation. But outside of laws, there is also a moving social contract, and moving social desires, that expand/contract these social divides accordingly.

Expectations Differ by Level in the Stack

In other words, there is some understanding that there are differences between utilities which supply basic human needs for all, and private platforms which have the choice and perhaps responsibility to exclude people who choose to violate the norms of the rest of that community.

The challenge comes when platforms get so big that they are basically utilities. There it gets fuzzy, and the platforms on the edge of society bear the brunt of its divides.