⚠️ This chapter is a LOT more theoretical than the others but set up the theoretical foundations for machine learning - skip or persevere, your choice but be warned

In our prior chapter we learned to use Haussler’s Theorem to bound our true error as a function of the number of examples drawn. 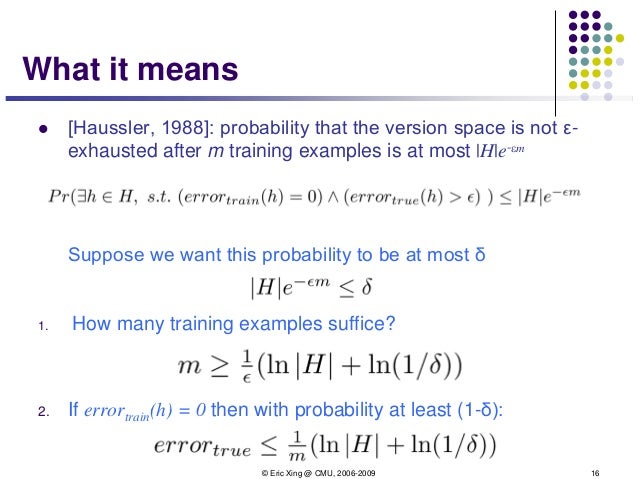 However this formula does rely on the hypothesis space being finite (i.e. risking that the “true” hypothesis is something we aren’t considering). In this chapter we consider the question of having infinite hypothesis spaces.

If the previous chapter got you excited, this is going to get you down. Infinite spaces are everywhere. Not every problem has binary input spaces. Anything with continuous values has infinite spaces.

However we can make the distinction between a syntactic hypothesis space (all the things you could possibly guess) and a semantic hypothesis space (all the functions you can possibly represent) and collapse infinite spaces down to discrete ones. We do this with Decision Trees on continuous values, where we pick a split point for a continuous value based on having a meaningful difference despite the theoretically infinite possible values.

VC Dimension and the Power of a Hypothesis Space

In fact, picking a split point on a continuous number line is such an easy split that we can generalize this idea and ask:

What is the largest set of inputs that the hypothesis class can label in all possible ways (aka shattering)?

In other words, what is the largest number of variables you can use to semantically express the same hypothesis space as the real (infinite) hypothesis space? This quantity is called the VC dimension.

VC stands for Vapnik (the same guy that invented SVMs) and Chervonenkis. VC theory relates the VC Dimension of a class to the amount of data you need to be able to learn effectively in that class.

This is a very simple example just for learning.

Shattering is a small but critical concept and denotes assigning different labels to points. For example, if the points are all on top of each other they could not be shattered.

Linear separators, like the ones we have looked at with the most basic SVM example, separate a plane into a positive and a negative side. We’ve already established these are infinite hypothesis spaces.

If H: The set of all separators (lines) from y=mx+b:

More separators and their VC dimension examples and the reasoning behind them can be found here.

We can have nonlinear separators as well - 2d circles have a VC Dimension of 3 for example.

Despite recasting the conversation from infinite spaces to dimensionality, it is still possible to form hypotheses with infinite dimension. A trivial example is a hypothesis class for points inside a convex polygon:

(best watched to be understood)

Now we have developed a concept of VC Dimension, we can connect it back to our former formula for Sample Complexity (completely skipping the proof…): 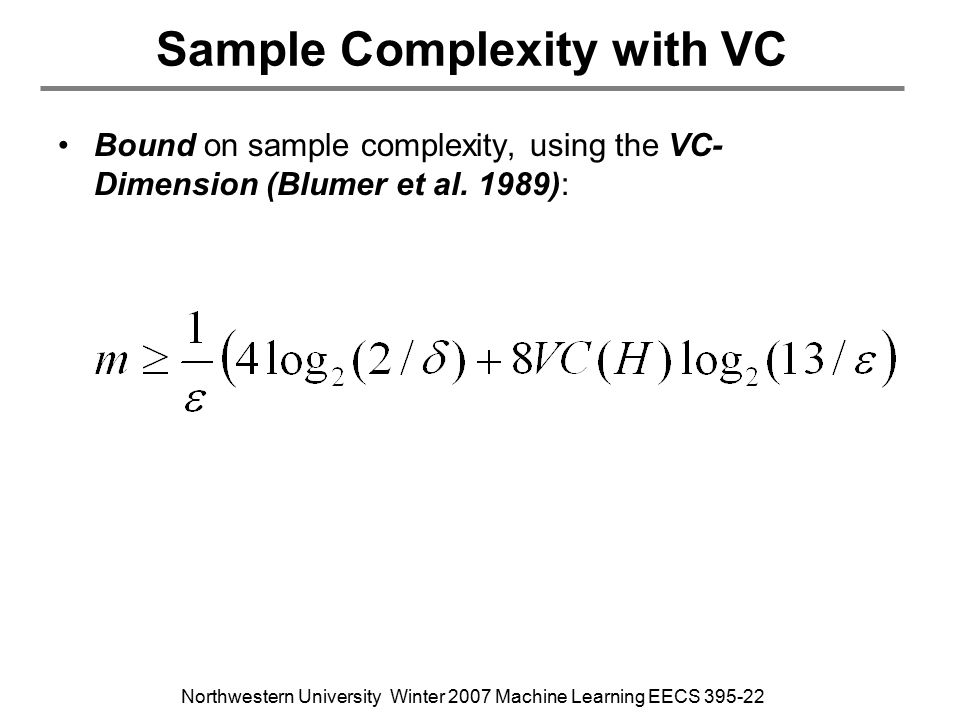 The VC of Finite Hypothesis Space

If we denote the VC of Finite Hypothesis Space by d, there has to be 2^d distinct concepts (as each different labelling can be captured by a different hypothesis in a class) - therefore 2^d is less than or equal to the number of hyptheses |H|.

Rearranging, d <= log2 (|H|). So a finite hypothesis class gives us finite VC dimensions, and therefore make things “PAC Learnable”. There is a further proof that this goes the other way - H is PAC Learnable if and only iff the VC Dimension is finite. VC Dimension captures the notion of PAC Learnability in a single concept.

Hopefully that was a good introduction to VC Dimensions. I am planning more primers and would love your feedback and questions on: