Signs that a Startup is Going Bad

When money was easy, everyone looked like a genius and even the worst run companies could put up some numbers. But in early 2023, we are now in the midst of a tech recession if not a general economic recession.

As Buffett would say; the tide has gone out, and now we see who has been swimming naked.

A friend of mine was recently evaluating job offers and one was clearly a startup that was “going bad”. It was clear to me but not to them; I figured I would write a post spelling out some things I look at.

Why it’s worth talking about the Unhappy Path

People love to talk up about startups on the way up. VCs want to demonstrate they saw the potential early, founders want to recruit employees and customers, media want access to a future unicorn, and nobody wants to punch down on the little guy. Outrage and dramatic disasters get the most attention, but a good second place to that is the positive happy vibes of someone genuinely trying to “make the world a better place”.

There’s a certain obsequious boosterism that forms around startups in their early days: early milestones are hit, growth numbers are strong, and some form of up-and-to-the-right chart with no Y axis drives the narrative. A rare few even do end up boasting the most meaningful Y axis of all: revenue. 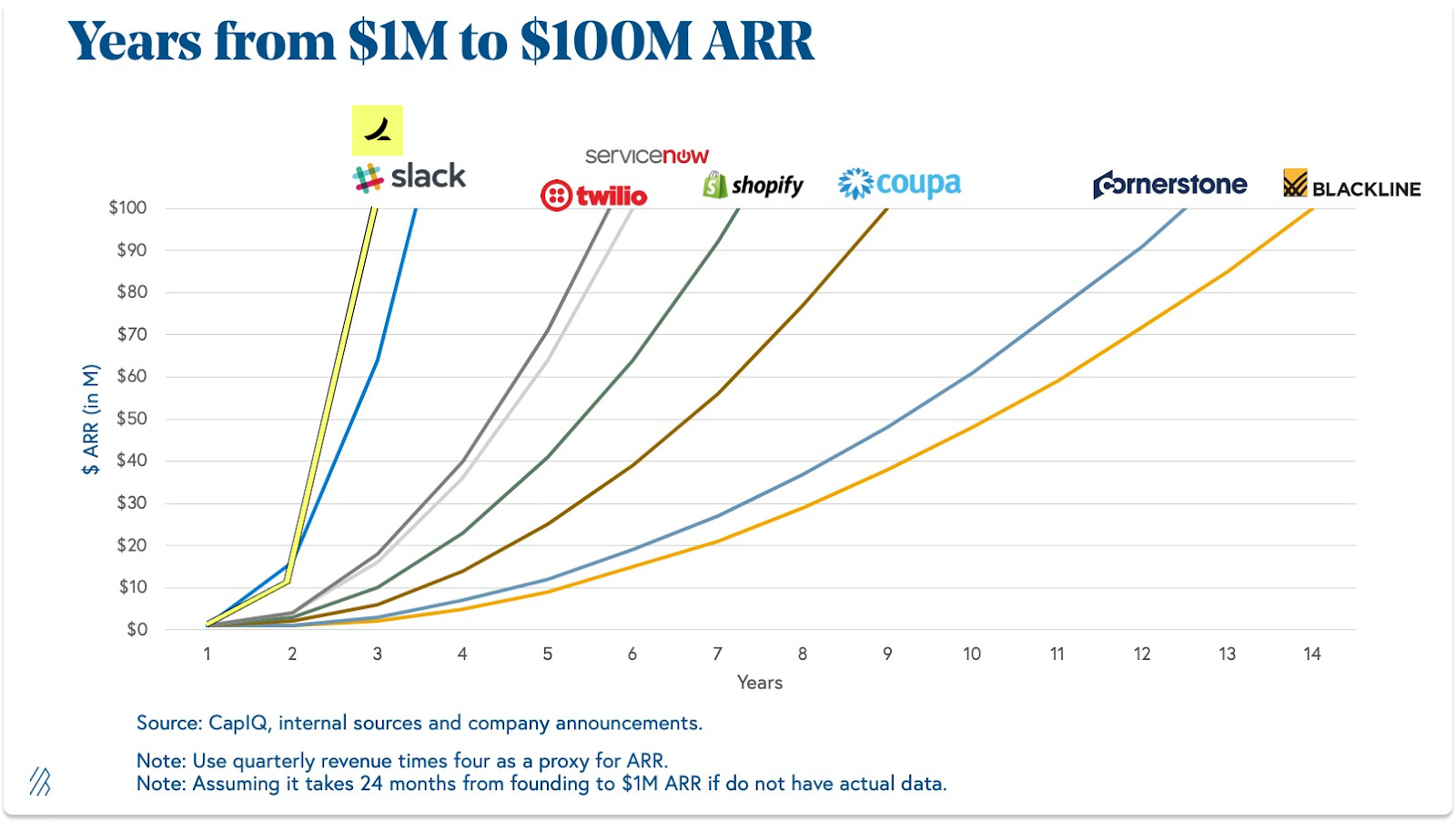 Positive stories are also a much easier and cleaner story to tell; as Tolstoy would put it, all rocketship startups are alike, but every fading startup is fading in its own way, for entirely different reasons depending on who you ask.

We’re here to talk about the other side of the S curve. Many startups-going-bad will handwave away their decline by saying it is the post-hype path, but don’t be fooled. We’re talking about the inconvenient, unspoken part of Paul Graham’s Startup Curve: 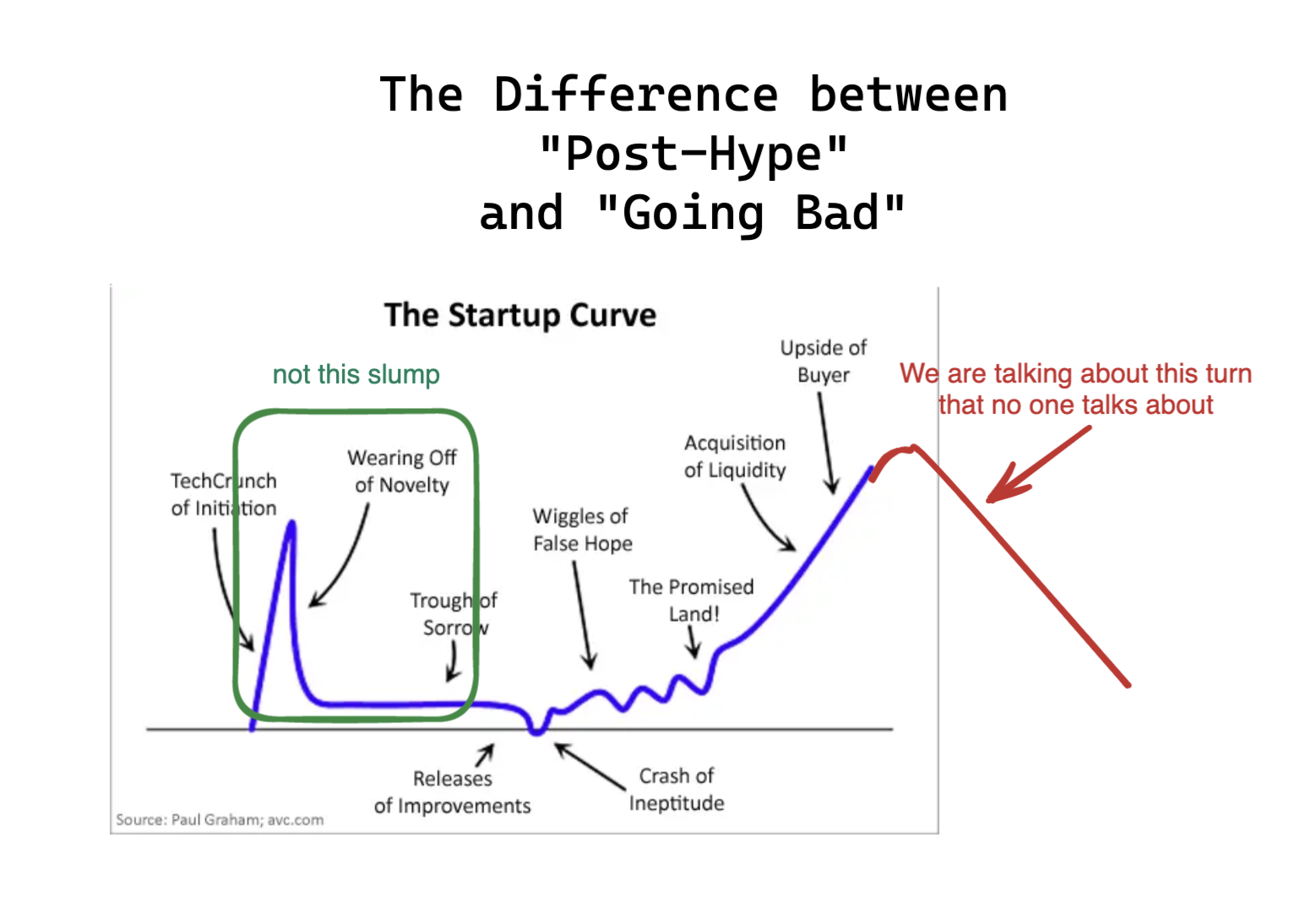 When I was newer to the startup game I felt that unease, but couldn’t really do anything about it (nor had I seen enough to know). But now I see the impact on the work and careers of people who aren’t “clued in” enough to know when a once-great company is no longer the same. Then, many years after it’s obvious to everybody else but you, people openly say things like ”the company was on trajectory of death” but that’s too late when you’ve made significant career, tech stack, or other forms of investment choices already.

So I figured I’d jot down some things I’ve seen to form a mental checklist, and perhaps get more ideas from others who have seen the same.

Please note that this list is informed by experiences both from companies I’ve worked at and companies I’ve only observed via friends/my network, so don’t derive any signal from my work history.

Also, companies can often go through phases where they are down and then get revived again (most famously Apple), so down-for-now is not down-for-ever.

Alright, with all the necessary disclaimers out of the way:

Signs that a Startup is Going Bad

Thanks to Vijay (anon) and Kareem for contributing some ideas in this list!

I wrote this post to send generic startup advice to a friend evaluating some offers, but I probably missed some obvious ones. Please leave comments on other things that can indicate a startup is on it’s way down! The less obvious, the more leading-indicator, the better.