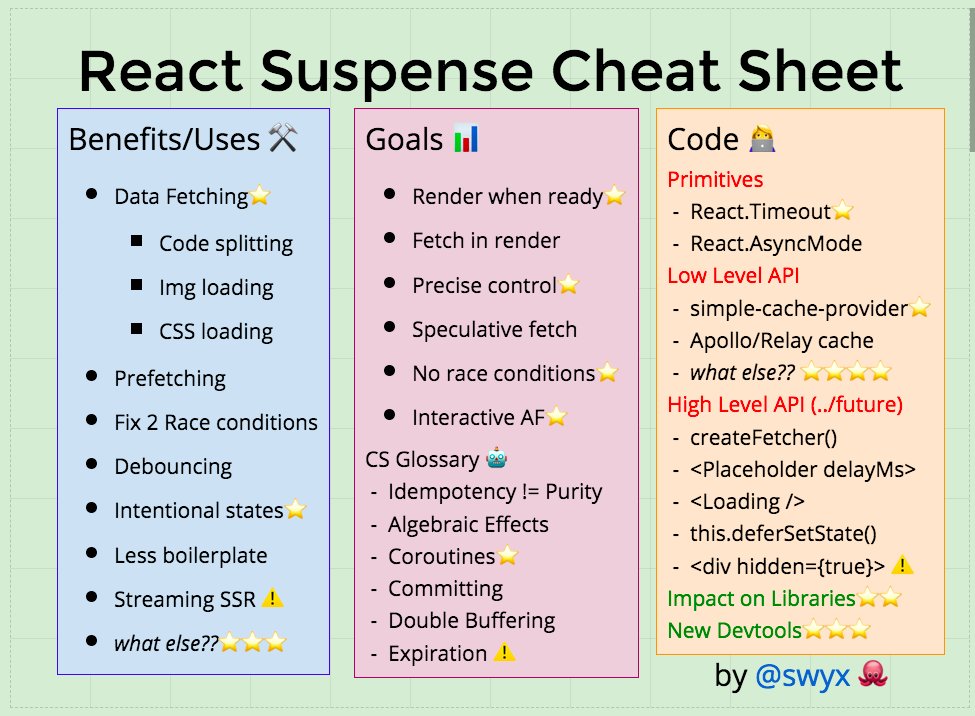 More to the point, if you are going to advocate for refactoring to use React Suspense in your company, you will want to convincingly explain what it is and how it does what it does, to bosses that don’t care and have actual issues with money attached for you to pick up.

A lot of us will try to explain Concurrent React by comparison to existing frontend paradigms. But you can only watch Andrew get frustrated at spinners again and again and again so many times. Of course, like me, you can try to make memes out of it, but there’s only so much you can do, and I have a strong suspicion that most bosses won’t care.

My insight is this: We’re not good at this because we’re new at this.

But you know who’s gotten good at explaining these concepts? Non-frontend developers. Why? Because they’ve had to, and because they’ve been using this stuff a lot longer than we have.

You know what you get when you get when you google Fibers and Time Slicing? Links to Operating System articles! Because that’s where we took the ideas from! Maybe we should look at how those people explain their ideas! (except please do it more coherently than I did).

First was Raymond Hettinger’s Keynote on Concurrency in Python. In this talk he discusses two contrasting concurrency models - threading vs async.

Here he explains Threads and why we don’t like them:

Yes, JS is single-threaded, except not really. You’ve encountered threads in React when you run into race conditions resulting from separate components fetching data independently, for example. And to solve them, you’ve had to lift state up in order to resolve the race condition. That, to me, sounds like a “lock”.

Here’s Seb on “working around the lack of threads”.

The second talk is Daan Leijen’s Asynchrony with Algebraic Effects in Koka. This is the talk that made them accessible to me. Because I like two word summaries, I mostly go with “resumable exceptions”.

However this glosses over an important design goal, which is able to write components without worrying about what is in their children or siblings. That’s how you get non-leaky abstractions. Sophie calls this facilitating local reasoning, which you again see if you look at DataLoader from the GraphQL world.

Where is the cooperative, voluntary yielding in React Suspense? We don’t write it or see it!

For a while, I had a problem with Concurrent React being described as “cooperative scheduling” because, as Wikipedia says:

Processes voluntarily yield control periodically or when idle or logically blocked in order to enable multiple applications to be run concurrently. This type of multitasking is called “cooperative” because all programs must cooperate for the entire scheduling scheme to work.

As Venkat quotes in his talk, ”We can solve any problem by introducing an extra level of indirection”. Concurrent React achieves maximum responsiveness by rendering each Fiber bit by bit, lazily (hence the stark difference in the Stack vs Fiber Sierpinski Reconciler demo). It also solves for the API design issue of Algebraic Effects and one-ups other scheduling frameworks by introducing this extra layer of indirection called React Fiber.

Venkat’s talk also discusses why functional programming isn’t as inefficient as it might seem, because of intermediate representations. This is analogous to the Fiber data structure itself, which enables the intended suspend-and-resume nature of Suspense, which is very efficient because no extra work is done.