Getting Senpai To Notice You

I started messing with Stable Diffusion on Sept 3rd. I published my first post on it yesterday, Sept 17. In that time I’ve had nice responses from Emad Mostaque (founder of Stability AI), Simon Willison (cofounder of Django, and prolific SD blogger), and gotten new follows from Emad, hardmaru (of Google Brain) and Cristobal Valenzuela (cofounder of Runway ML). At time of writing 14 hours after posting, the post has had 3k views, while the tweet had 49k, on a Saturday evening (typically weekends have about half the engagement of weekdays). 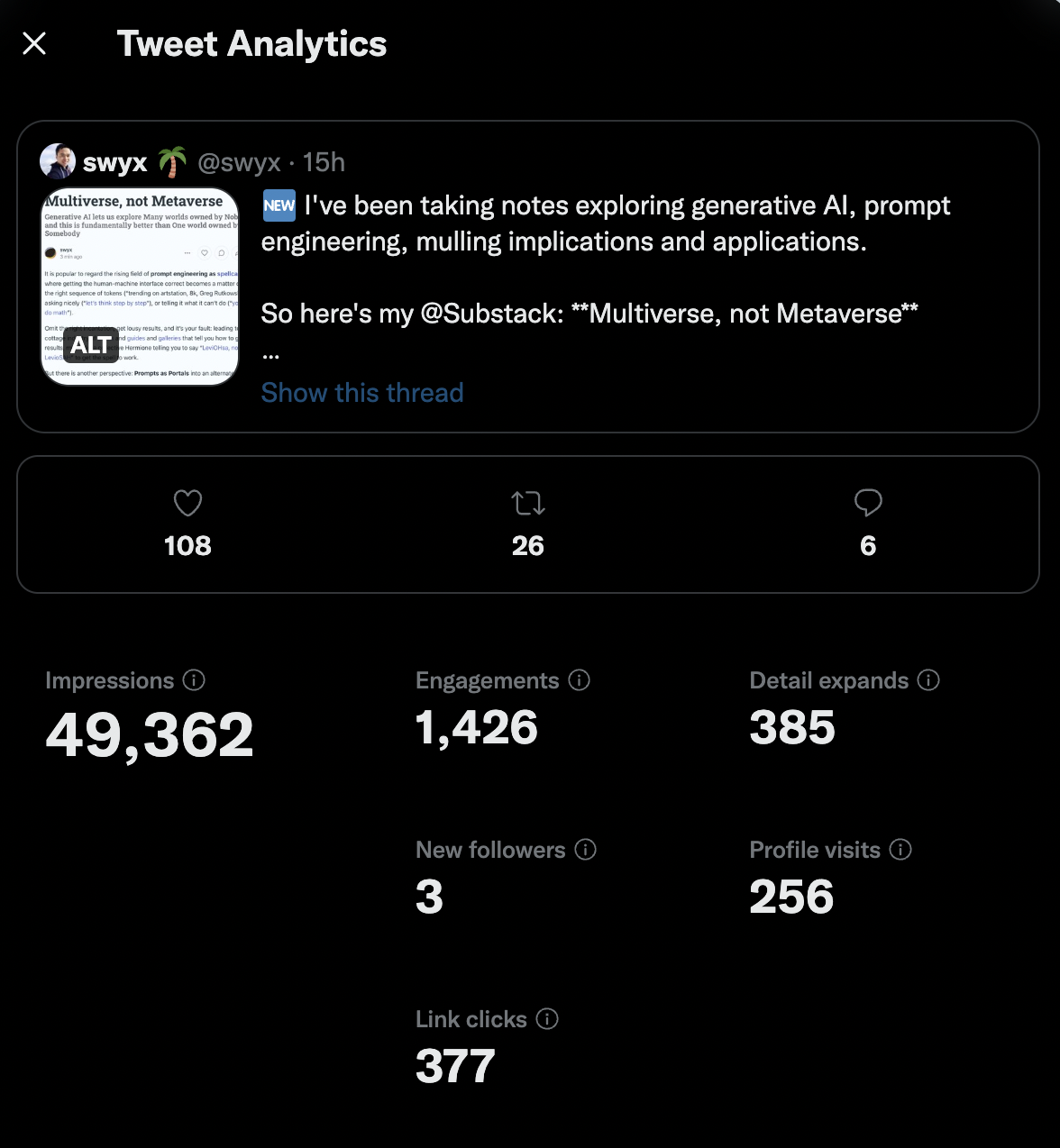 A very good start for a complete noob to the AI space like me.

On my personal blog, I wanted to break down how some of this works as strategies for breaking the cold start problem in content creation as a new entrant to any field, and getting the leaders of that field to at least read your writing and know your name.

Of course, I’m a known writer and have 45k twitter followers, so this advice/breakdown isn’t 100% relatable to total newcomers. But I still think there are general lessons I can offer you.

On Sept 3rd I expressed my personal FOMO on the Stable Diffusion LLM trend of the month, and @patio11 encouraged me to share notes (we’ve never talked and don’t have any particularly strong relationship, although of course I owe a lot of my thinking to his writing). Per my modus operandi of Open Source Knowledge, I started my notes repo that day, but felt so behind the ball I didn’t really publicize it, preferring instead to quietly collect datapoints and fill in very basic gaps in my knowledge (for example, everyone says CFG is one of the most important parameters in Stable Diffusion, but nobody explains that the param is actually called --scale (?!) - beyond frustrating).

I spent the next two weeks mucking around with the program itself, and reading/organizing the available literature, which was harder than usual because it is also a moving, decentralized target. The more I read, the more I learned what I didn’t know, which increased my impostor syndrome and prevented me from making further public statements.

The breakthrough came from my usual Following the Graph method of studying the people behind the projects, and finding out that Emad used to run a hedge fund 5 years ago, so was a recent finance to tech crossover like me. This was suddenly extremely relatable, but also shocking - how does a guy with no ML PhD (yes he did do a CS Masters’ at Oxford), no years of research, suddenly vault to the seeming top of the field in ~2 years?

I dug in deeper, and that was to be my first piece - just a straightforward biographical dive into Emad.

I almost published it. 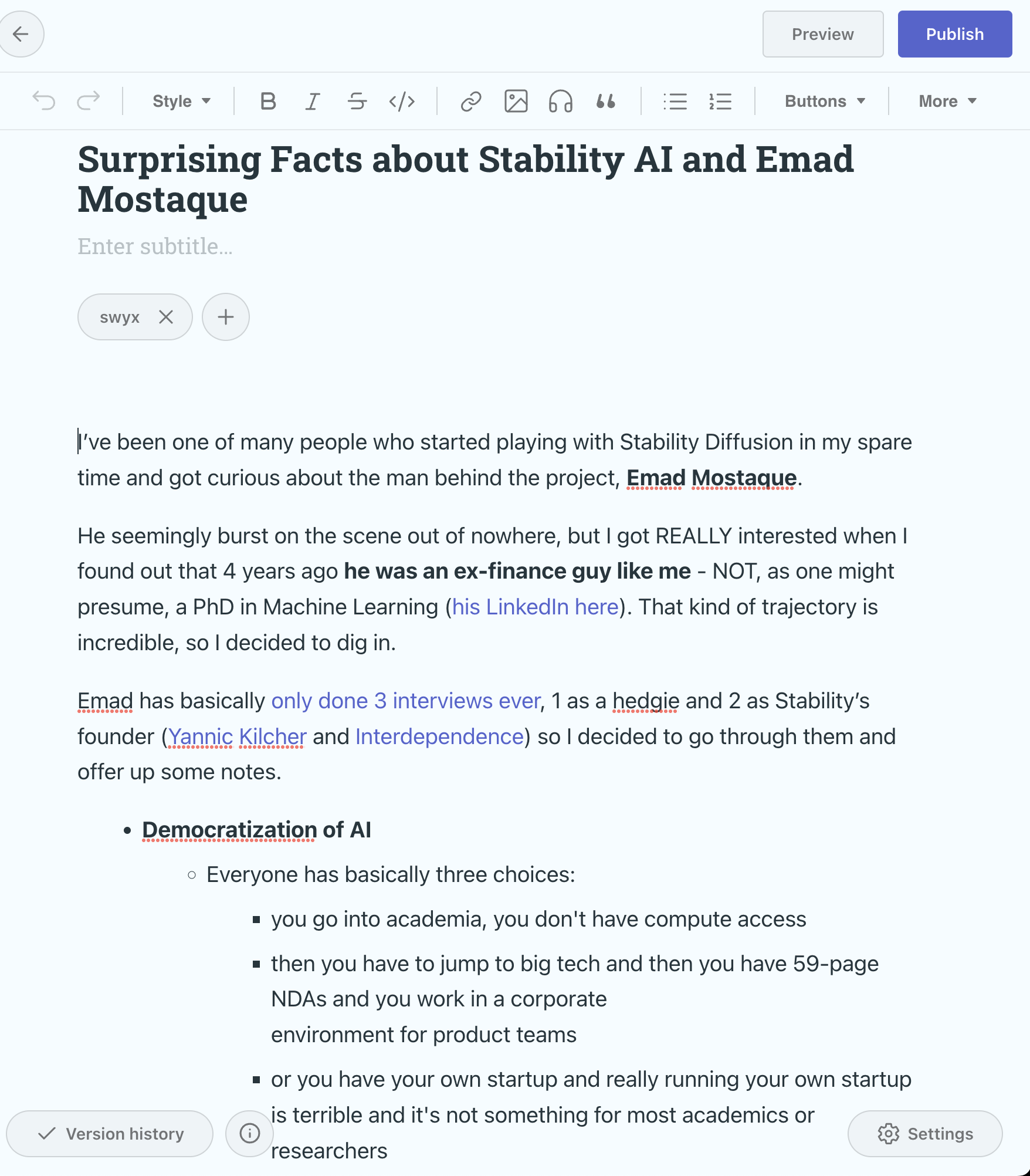 (you can read it here if you’re curious)

I don’t have a particular reason why I didn’t publish it, apart from it was late at night and I usually like to publish in the US morning, so I put it off and then got busy the next day.

But then on Saturday (yesterday) I was listening to Simon on the Changelog podcast talk about his thesis of prompt engineering as spellcasting, and that led me to think about my opposite/alternative view of prompts as search/prompts as portals.

My view came about from watching Pieter Levels find a house he loved, and then in trying to 3D model the house, try to get a different angle on the same house. This was an eerie, out of body experience - for the first time, Stable Diffusion wasn’t randomly generated 2D art - for the first time, we weren’t trying to get an image of any house, we were trying to get an image of this house. As far as this house knows, it is real, and exists, and we are just peering into it from another universe.

Hence, the multiversal theory. I knew this was more original and insightful than the Emad bio, so I threw away that draft and started the new piece.

I took Saturday afternoon to write it up (waiting between flights, but that’s another story). Picked Substack purely because I felt this topic deserved a different space than my regular blog or dxtips, and had seen the inbuilt network effects work very well for some other writers.

Then I published it, quote tweeted @patio11’s original tweet, added a screenshot, tagged Pieter, and also DM’ed it to Simon mentioning it was inspired by his podcast appearance. And left for my flight (12 hours, no internet, I’m sitting in the business lounge on layover right now).

During those 12 hours, it all happened. 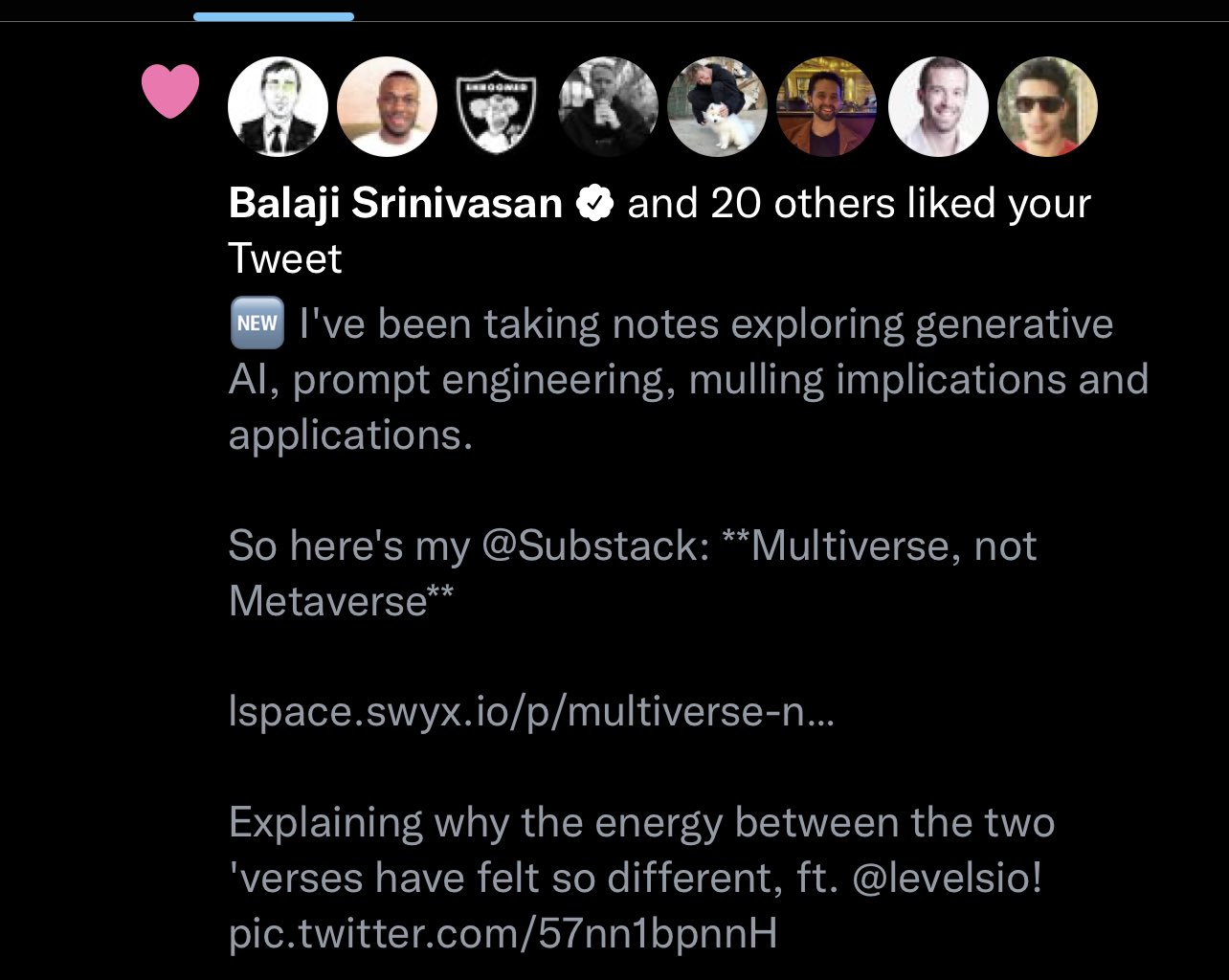 I have no particular plans for what to do with this, but just wanted to share the blow by blow for people who follow me looking to make their start in whatever field they are in.

Here is an analysis of what worked, in no particular order:

There you go. That’s all I know about getting senpai to notice you. Hope it helps.