This is the sixth in a series of class notes as I go through the free Udacity Computer Networking Basics course.

Say we have a central switch S that is linked to a destination D with a connection capacity of 1 Mbps. However, we have two source hosts H1 and H2 connecting through S trying to send data to D at rates of 10 Mbps and 100 Mbps respectively.

The exact numbers don’t matter, but the point is H1 and H2 are trying to send data at a much higher rate than the S-D link can take it. The S-D link is a bottleneck!

By Internet architecture design, the source hosts H1 and H2 are unaware of each other, and of the current state of the S-D link. As a result, they very inefficiently compete for resources on the bottleneck and this can be lead to lost packets and long delays, to the point where the S-D link isn’t even used to its full capacity because of all the failures. This is called congestion collapse. 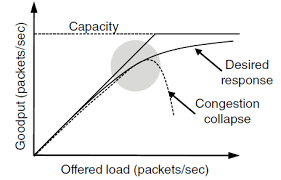 Congestion Collapse is defined where an increase in load leads to a decrease in useful work. It can be caused by:

So given the realities of different bandwidths in our network, we want to:

You can chart Fairness and Efficiency between two hosts with a phase plot: 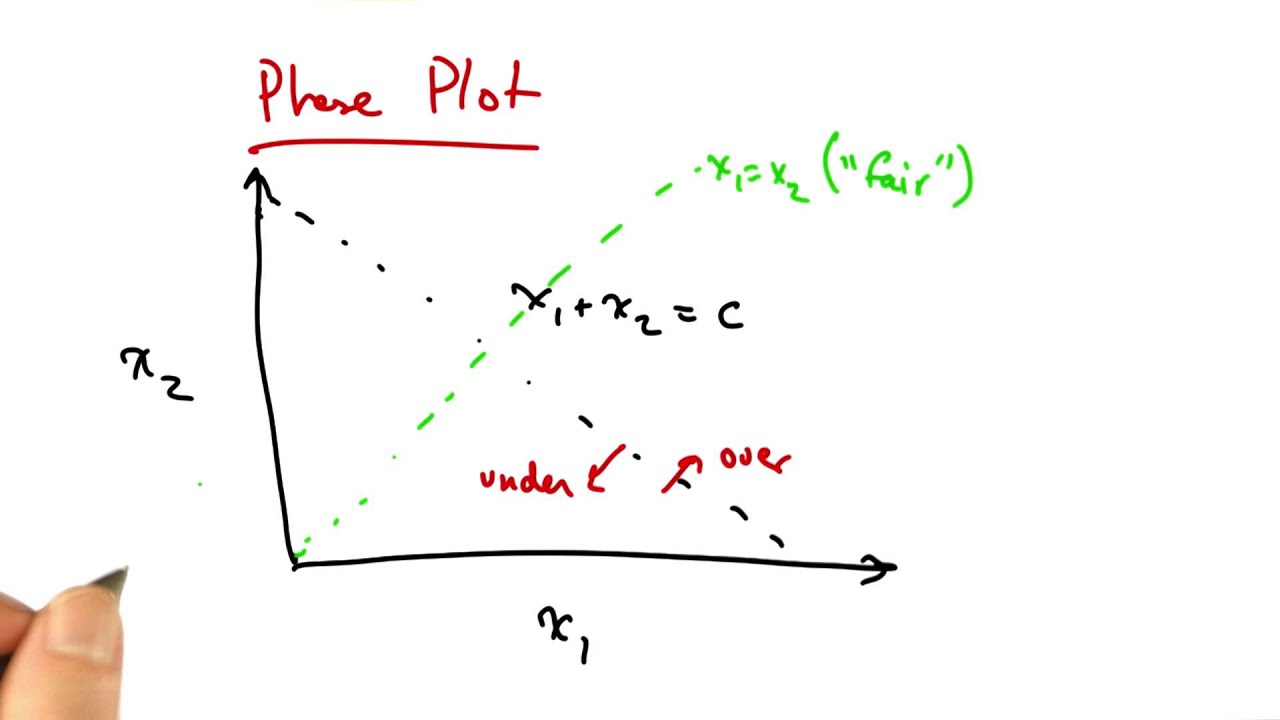 In TCP Congestion Control, senders slowly increase their rate until packets are dropped. Packet loss is interpreted as congestion and the rate is slowed down. The rate is increased again periodically to retest the network in case the congestion was temporary (eg due to a maxed out buffer in a router).

The increase/decrease algorithm can work in two ways.

On a phase plot, AIMD moves rates up parallel to the X1 = X2 “fair” line, and down according to its angle to the origin: 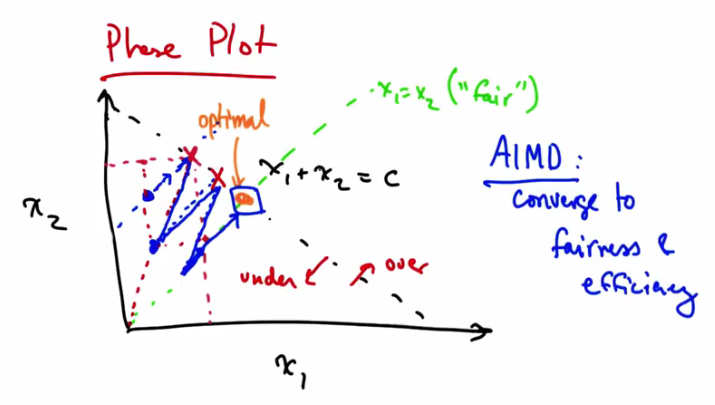 In terms of individual rate over time, AIMD also results in a “sawtooth” plot: 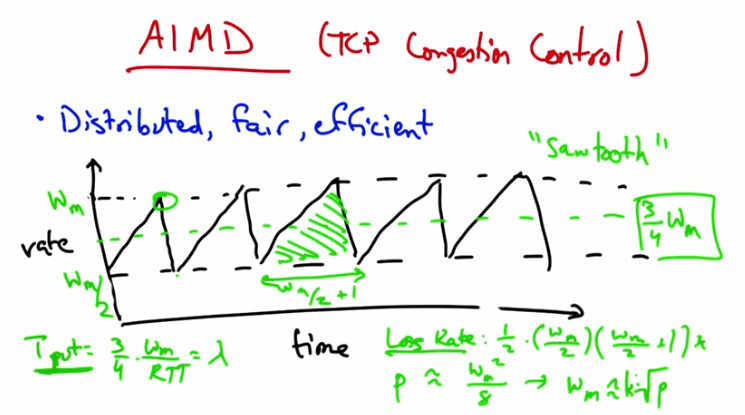 A TCP sender sends at an average rate of 3/4 of it’s window size due to AIMD.

To calculate throughput, you take the average rate divided by the RTT, or 3/4 * Wm/RTT.

Also because of AIMD, the time between the troughs is given by Wm/2 + 1 (the Wm/2 being the time taken to increase the height of half the window 1 at a time, and the 1 being the time it takes to decrease it in half).

There is a special congestion problem that specifically happens in the conditions of data centers. Incast is a drastic reduction in application throughput that results when servers using TCP all simultaneously request data (sometimes with Barrier Synchronization, leading to a gross underutilization of network capacity in many-to-one communication networks like a datacenter. This is due to:

Bottom line: Timers should operate on a granularity close to the RTT of the network, and in a Data Center that is <1ms.

The next half of this piece focuses on dealing with the unique problems of sending multimedia and streaming. Some characteristics of these situations are:

The most important of these is delay variation. We can establish a clientside buffer to manage some variation and variance but delay variations will threaten the smooth playback especially if the buffer is starved.

TCP is not a good fit for streaming. It is meant to:

All videos are converted to Flash, and every browser can play it with HTTP/TCP. Even though TCP isn’t a good fit for streaming, the creators of Youtube preferred to keep it simple so it can leverage existing HTTP/TCP infrastructure like CDNs.

Skype has a central login server but uses P2P to exchange data. It compresses to a fairly low bitrate (67 bytes/pkt, 140 pkts/sec or 40kbps), encrypted both ways. But it is still very susceptible to drops in network quality.

We can use explicit reservations, or marking and policing packet streams as higher priorities.

If we have a VOIP app and an FTP app both sharing the same bandwidth, we want to make sure the VOIP has a higher priority. We can mark the audio packets as they arrive at the router with a priority queue, and then use scheduling (eg weighted fair queueing where you simply serve the high-pri queue more often than the low-pri queue)

Hopefully this has been a good high level overview of the Congestion control and some of its practical implementations/applications. I am planning more primers and would love your feedback and questions on: