How to run Python and Portray on Netlify

Recently I was floored to hear Netlify’s name on the excellent TalkPython podcast as a place to host Python web development projects. Let’s talk about why I originally thought Python doesn’t work on Netlify, and why that is wrong.

TL;DR: In this post we cover how to set up any Python Static Site Generator to deploy on Netlify, using the newly launched Portray documentation generator as an example.

Python is for the Web, too

First, some personal history. In my previous career, I used Python for data analysis, thanks to the awesome time series and data munging capabilities of pandas and numpy. Today, as a part time Machine Learning student, I use frameworks like scipy and Tensorflow to declaratively create neural networks and data pipelines. So: a lot of number crunching, not very much web development.

Over time, I slowly learned that people are creating web experiences using Python too. A previous startup I worked at used the venerable and full featured Django framework, while I am aware that Flask and Pyramid are lighter weight frameworks (here’s a full list I found).

However, these are all server-side based technologies. This comes with all the complexities of deploying and scaling servers, which are well documented issues that often have little to do with the business goals you actually want to achieve, like continuously deploying your site. So I figured that Python would not be a popular JAMstack language.

It turns out I had a massive blind spot. Python has a rich set of Static Site Generators! I went to StaticGen.com and filtered for the Python language and found 40 SSG’s:

And just yesterday, I found a new one, Portray, at the top of Hacker News! Clearly this innovation is not over.

Static Site Generators are resoundingly JAMstack. That means Netlify should support Python based SSGs too. Let’s see if we can!

Deploying Portray (or any Python SSG) on Netlify

First I have to figure out how to get portray up and running. I have Python 3 installed, so I installed portray using pip3:

I needed a sample portray project to show some docs, so why not portray portray? I forked the project and cloned it locally:

Portray has a built in deploy to GitHub Pages functionality, but we’ll want to configure this for deployment to Netlify for some other features:

Netlify still defaults to Python 2.7 (👿) so we’ll need to fix it to 3.7 (which Portray needs) according to the Netlify docs:

We’ll also want to get Netlify to install Portray itself via requirements.txt:

That sets up the environment, but the final step is to configure the build setup (aka tell Netlify the information it needs to do things for you). There are a few equivalent ways to do this, so I’ll walk through 3 of the most popular. What’s common among all of them is you need to know upfront:

With an existing Netlify account, head to https://app.netlify.com/start and select the appropriate repo. Then fill in the build command and deploy directory: 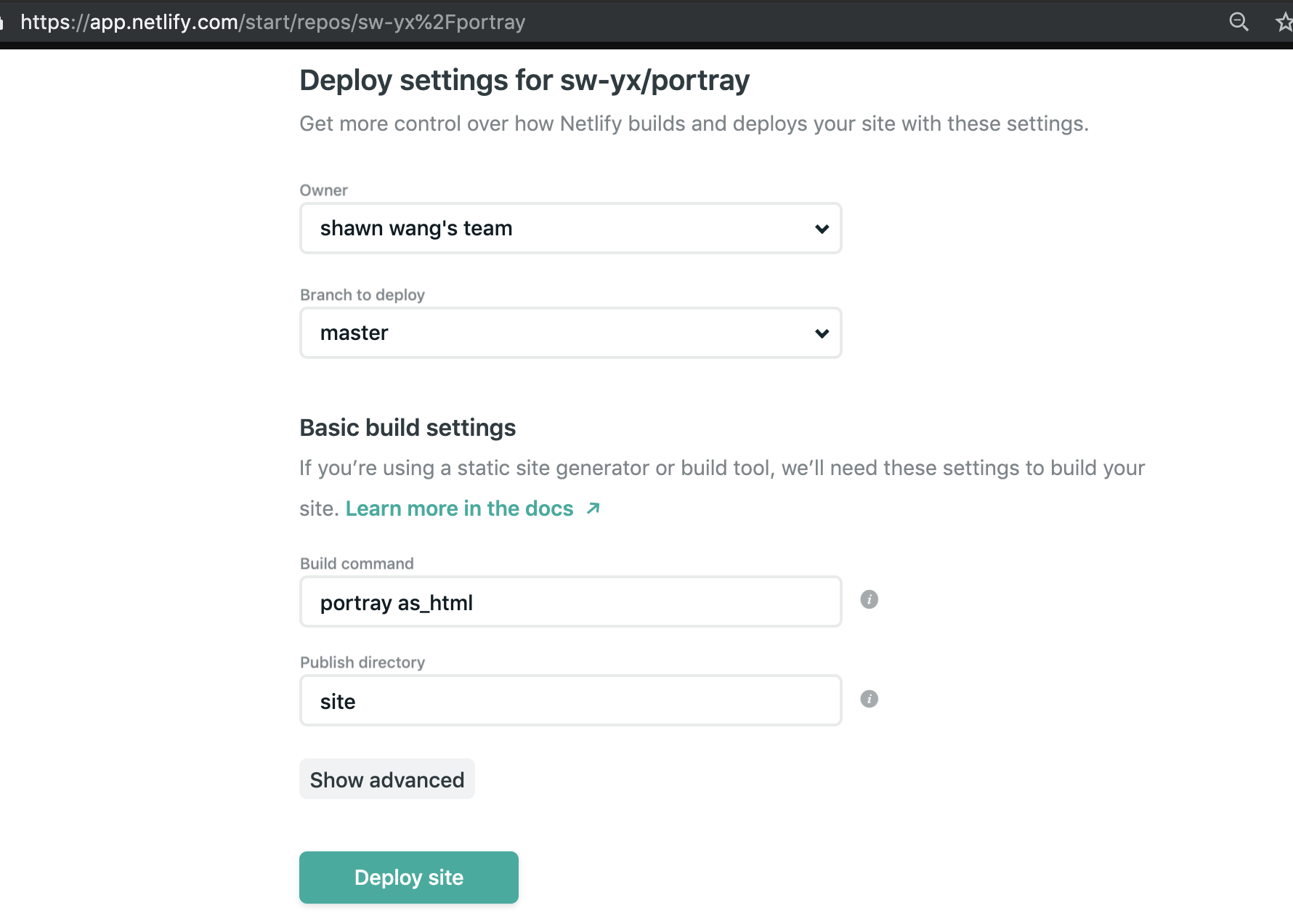 That’s it! That sets up the site and continuous deployment for you and gives you the basis for all the other features of Netlify.

This is for the people (like me!) who rather not leave their terminals. With the Netlify CLI installed and logged in, you can take any project and run a single command to set it up for a new site:

If your project has a git remote (on GitHub, GitLab or Bitbucket), it will set up continuous deployment for you, else it will assume you want a “manual deploy” (you can fix this later with netlify link). The CLI will ask you for the build command and deploy directory and scaffold out the netlify.toml config file for you:

If you need to do manual deployments, you can always run netlify deploy --prod, but we do encourage continuous deployment from git as a best practice.

The netlify.toml file explained above is useful for more than deploying just your site. If you check it into git, then people who fork your repo also get this configuration for free. Try it! We have this set up as a nice Deploy to Netlify button you can add to your README:

Deploy To Netlify (I used a text link because Scotch.io is buggy)

That sets up the fork and a new site in one click!

Python is my JAM

Hopefully this is helpful for any Python users out there looking for a great way to host their JAMstack sites (particularly docs) on Netlify.