When talking about “Narrow Waists” I should clarify that I’m only referring to the term from the somewhat obscure “Internet Architecture” model of the different technology layers (my notes here): 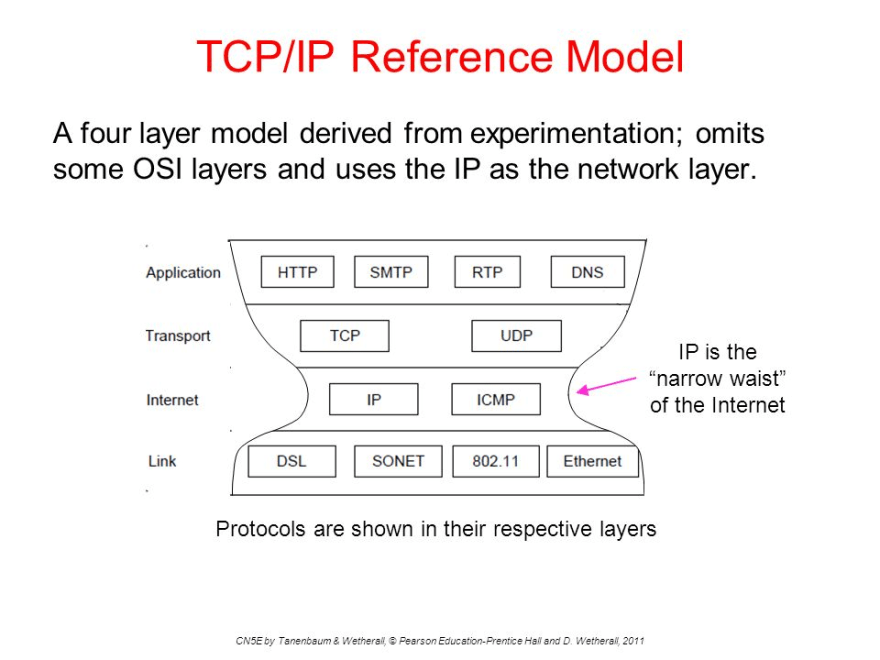 I guess depending on your background it’s either obscure or really archaic. I’d love a better name for it, but haven’t come across one so am sticking to this for now.

I’m spending all day today transiting between three cities (the return leg of one trip and the outbound leg of the next). This is a surprisingly complicated logistical maneuver. Here are the chain of events that have to happen:

I have to do this all on time, or downstream dependencies are ruined (including beyond this immediate list of events). Yet there is very little guidance to doing it right apart from the raw cost of a mistake. Checking out of a hotel is as simple as returning the keycards - they couldn’t care less where I head to next, or whether I’m checking out on time. I can take any number of transportation options to the airport - the airport doesn’t care. When I check in to the airline, it’s on me to make it through security and in general show up in time for boarding - if I miss it, the airline doesn’t care apart from issuing a “last call”.

But also notable is the lack of some options. There is no first party “integrated” option where the hotel kicks me out on time with scheduled transportation to get in to the airport. Of course there are third party tour groups and concierges that do these, but the enforcement is weak. And unless you have a private flight, there is no getting around airport security. The Airport is the “narrow waist” everything else in the chain must work towards.

Why Narrow Waists are Underrated

Technology is layer upon layer of abstraction. This could be considered extremely wasteful.

However, while there are convincing arguments (like Jonathan Blow’s) for being “FULL stack”, most mortal humans will never know it all, and historical defaults are often bad for modern usecases, so abstractions are important.

So we aren’t 100% pro abstraction, nor are we 100% anti abstraction either. It’s nice to acknowledge extremes, but I’d like more rules focusing on the middle cases which we deal with most of the time anyway. That’s where narrow waists come in (I’ll assume you’ve read my notes above, more info here and here).

The problem with abstraction layers is combinatorial explosion. Each combination bears ”impedance mismatch”, which is engineer-speak for “abstraction I don’t like”. Abstractions leak all the time; there is an explicit cost in terms of hooking things up, and implicit costs in terms of edge cases, dependency management/upgrade/maintenance costs and decision fatigue. Individually, each abstraction might bring enough value to overcome its costs. However the combinatorics of M x N x O x P abstractions in each layer is an externality weighing down the entire ecosystem.

So a “narrow waist” intentionally keeps one or more of the middle layers small. This allows for two things:

Another aspect of “narrow waists” are the typically very limited nature that frustrates users. Narrow waists often benefit from “Worse is Better” type software dynamics. Often you hear people proposing radical new alternatives that would solve the problems of the incumbent technology. These proposals sound great, but are unable to overcome the network effect of the incumbent and fail to gain traction. This is a trademark sign of a narrow waist existing (or a normal waist narrowing).

I don’t have a ton of examples for you as I am just writing up these thoughts, but I will revisit with more examples in future:

When do they die?

Quite relevant is the Newspaper/Yellow Pages example - Narrow Waists seem to have a deadlock dual network effect going on that is quite unbreakable, but nothing lasts forever. When do Narrow Waists fall?