AWS is just too hard to use, and it’s not your fault. Today I’m joining to help AWS build for App Developers, and to grow the Amplify Community with people who Learn AWS in Public.

When AWS officially relaunched in 2006, Jeff Bezos famously pitched it with eight words: ”We Build Muck, So You Don’t Have To“. And a lot of Muck was built. The 2006 launch included 3 services (S3 for distributed storage, SQS for message queues, EC2 for virtual servers). As of Jan 2020, there were 283. Today, one can get decision fatigue just trying to decide which of the 7 ways to do async message processing in AWS to choose.

The sheer number of AWS services is a punchline, but is also testament to principled customer obsession. With rare exceptions, AWS builds things customers ask for, never deprecates them (even the failures), and only lowers prices. Do this for two decades, and multiply by the growth of the Internet, and it’s frankly amazing there aren’t more. But the upshot of this is that everyone understands that they can trust AWS never to “move their cheese”. Brand AWS is therefore more valuable than any service, because it cannot be copied, it has to be earned. Almost to a fault, AWS prioritizes stability of their Infrastructure as a Service, and in exchange, businesses know that they can give it their most critical workloads.

The tradeoff was beginner friendliness. The AWS Console has improved by leaps and bounds over the years, but it is virtually impossible to make it fit the diverse usecases and experience levels of over one million customers. This was especially true for app developers. AWS was a godsend for backend/IT budgets, taking relative cost of infrastructure from 70% to 30% and solving underutilization by providing virtual servers and elastic capacity. But there was no net reduction in complexity for developers working at the application level. We simply swapped one set of hardware based computing primitives for an on-demand, cheaper (in terms of TCO), unfamiliar, proprietary set of software-defined computing primitives.

In the spectrum of IaaS vs PaaS, App developers just want an opinionated platform with good primitives to build on, rather than having to build their own platform from scratch: That is where Cloud Distros come in.

I’ve written before about the concept of Cloud Distros, but I’ll recap the main points here: 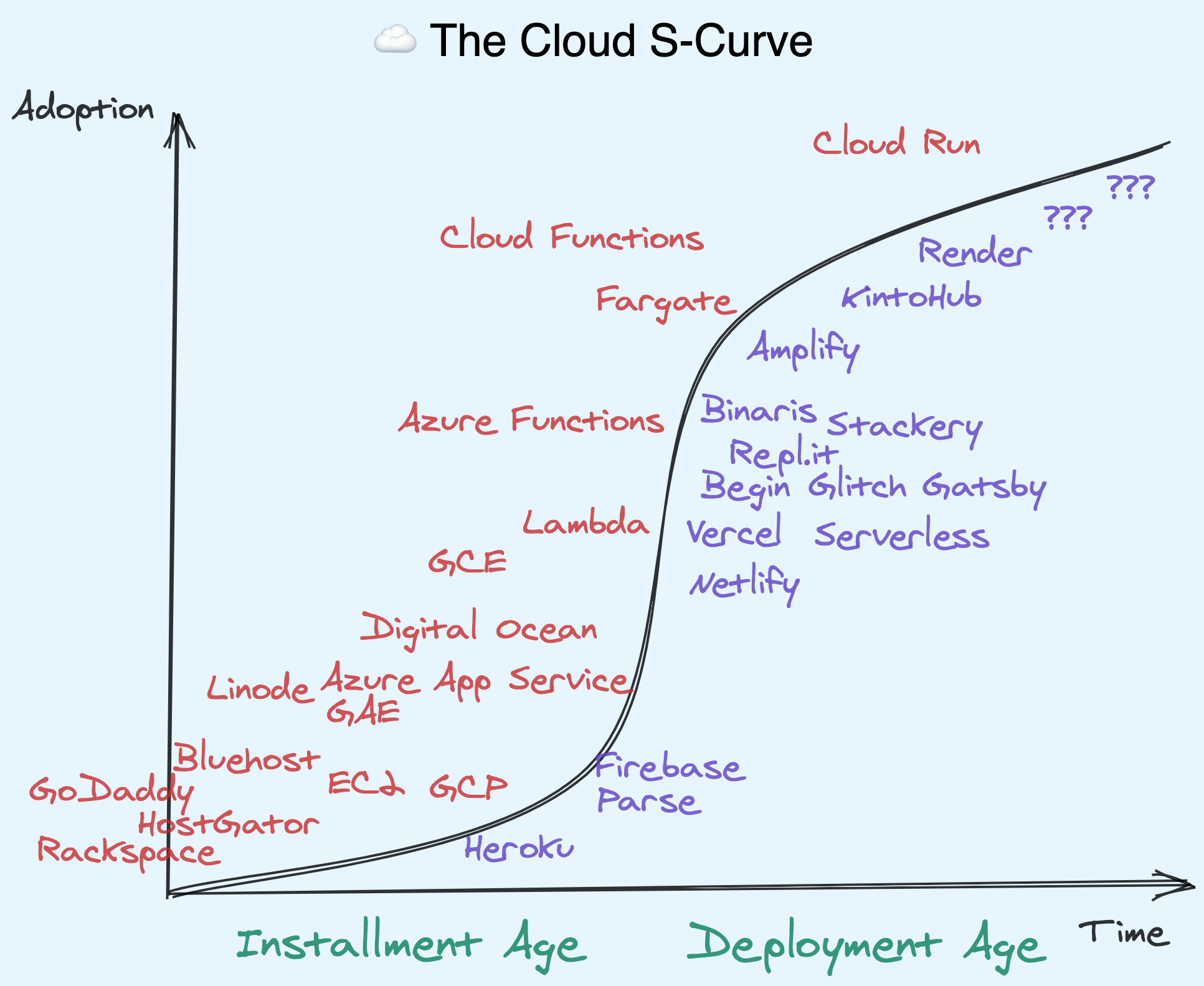 Amplify is the first truly first-party “Cloud Distro”, if you don’t count Google-acquired Firebase. This does not make it automatically superior. Far from it! AWS has a lot of non-negotiable requirements to get started (from requiring a credit card upfront to requiring IAM setup for a basic demo). And let’s face it, its UI will never win design awards. That just categorically rules it out for many App Devs. In the battle for developer experience, AWS is not the mighty incumbent, it is the underdog.

But Amplify has at least two killer unique attributes that make it compelling to some, and at least worth considering for most:

Simplification requires opinionation, and on that Amplify makes its biggest bets of all - curating the “best of” other AWS services. Instead of using one of the myriad ways to setup AWS Lambda and configure API Gateway, you can just type amplify add api and the appropriate GraphQL or REST resources are set up for you, with your infrastructure fully described as code. Storage? amplify add storage. Auth? amplify add auth. There’s a half dozen more I haven’t even got to yet. But all these dedicated services coming together means you don’t need to manage servers to do everything you need in an app.

Amplify enables the ”fullstack serverless” future. AWS makes the bulk of its money on providing virtual servers today, but from both internal and external metrics, it is clear the future is serverless. A bet on Amplify is a bet on the future of AWS.

Note: there will forever be a place for traditional VPSes and even on-premises data centers - the serverless movement is additive rather than destructive.

For a company famous for having every team operate as separately moving parts, Amplify runs the opposite direction. It normalizes the workflows of its disparate constituents in a single toolchain, from the hosted Amplify Console, to the CLI on your machine, to the Libraries/SDKs that run on your users’ devices. And this works the exact same way whether you are working on an iOS, Android, React Native, or JS (React, Vue, Svelte, etc) Web App.

Lastly, it is just abundantly clear that Amplify represents a different kind of AWS than you or I are used to. Unlike most AWS products, Amplify is fully open source. They write integrations for all popular JS frameworks (React, React Native, Angular, Ionic, and Vue) and Swift for iOS and Java/Kotlin for Android. They do support on GitHub and chat on Discord. They even advertise on podcasts you and I listen to, like ShopTalk Show and Ladybug. In short, they’re meeting us where we are.

This is, as far as I know, unprecedented in AWS’ approach to App Developers. I think it is paying off. Anecdotally, Amplify is growing three times faster than the rest of AWS.

Note: If you’d like to learn more about Amplify, join the free Virtual Amplify Days event from Jun 10-11th to hear customer stories from people who have put every part of Amplify in production. I’ll be right there with you taking this all in!

I am joining AWS Mobile today as a Senior Developer Advocate. AWS Mobile houses Amplify, Amplify Console (One stop CI/CD + CDN + DNS), AWS Device Farm (Run tests on real phones), and AppSync (GraphQL Gateway and Realtime/Offline Syncing), and is closely connected to API Gateway (Public API Endpoints) and Amazon Pinpoint (Analytics & Engagement). AppSync is worth a special mention because it is what first put the idea of joining AWS in my head.

A year ago I wrote Optimistic, Offline-first apps using serverless functions and GraphQL sketching out a set of integrated technologies. They would have the net effect of making apps feel a lot faster and more reliable (because optimistic and offline-first), while making it a lot easier to develop this table-stakes experience (because the GraphQL schema lets us establish an eventually consistent client-server contract).

9 months later, the Amplify DataStore was announced at Re:Invent (which addressed most of the things I wanted). I didn’t get everything right, but it was clear that I was thinking on the same wavelength as someone at AWS (it turned out to be Richard Threlkeld, but clearly he was supported by others). AWS believed in this wacky idea enough to resource its development over 2 years. I don’t think I’ve ever worked at a place that could do something like that.

I spoke to a variety of companies, large and small, to explore what I wanted to do and figure out my market value. (As an aside: It is TRICKY for developer advocates to put themselves on the market while still employed!) But far and away the smoothest process where I was “on the same page” with everyone was the ~1 month I spent interviewing with AWS. It helped a lot that I’d known my hiring manager, Nader for ~2yrs at this point so there really wasn’t a whole lot he didn’t already know about me (a huge benefit of Learning in Public btw) nor I him. The final “super day” on-site was challenging and actually had me worried I failed 1-2 of the interviews. But I was pleasantly surprised to hear that I had received unanimous yeses!

Nader is an industry legend and personal inspiration. When I completed my first solo project at my bootcamp, I made a crappy React Native boilerplate that used the best UI Toolkit I could find, React Native Elements. I didn’t know it was Nader’s. When I applied for my first conference talk, Nader helped review my CFP. When I decided to get better at CSS, Nader encouraged and retweeted me. He is constantly helping out developers, from sharing invaluable advice on being a prosperous consultant, to helping developers find jobs during this crisis, to using his platform to help others get their start. He doesn’t just lift others up, he also puts the “heavy lifting” in “undifferentiated heavy lifting”! I am excited he is leading the team, and nervous how our friendship will change now he is my manager.

With this move, I have just gone from bootcamp grad in 2017 to getting hired at a BigCo L6 level in 3 years. My friends say I don’t need the validation, but I gotta tell you, it does feel nice.

The coronavirus shutdowns happened almost immediately after I left Netlify, which caused complications in my visa situation (I am not American). I was supposed to start as a US Remote employee in April; instead I’m starting in Singapore today. It’s taken a financial toll - I estimate that this coronavirus delay and change in employment situation will cost me about $70k in foregone earnings. This hurts more because I am now the primary earner for my family of 4. I’ve been writing a book to make up some of that; but all things considered I’m glad to still have a stable job again.

I have never considered myself a “big company” guy. I value autonomy and flexibility, doing the right thing over the done thing. But AWS is not a typical BigCo - it famously runs on “two pizza teams” (not literally true - Amplify is more like 20 pizzas - but still, not huge). I’ve quoted Bezos since my second ever meetup talk, and have always admired AWS practices from afar, from the 6-pagers right down to the anecdote told in Steve Yegge’s Platforms Rant. Time to see this modern colossus from the inside.

AWS has been making developers more productive for 14 years. For everyone at AWS, myself included, today is Day 1.