Let’s say you needed a multipurpose tool. Which of these would you pick? 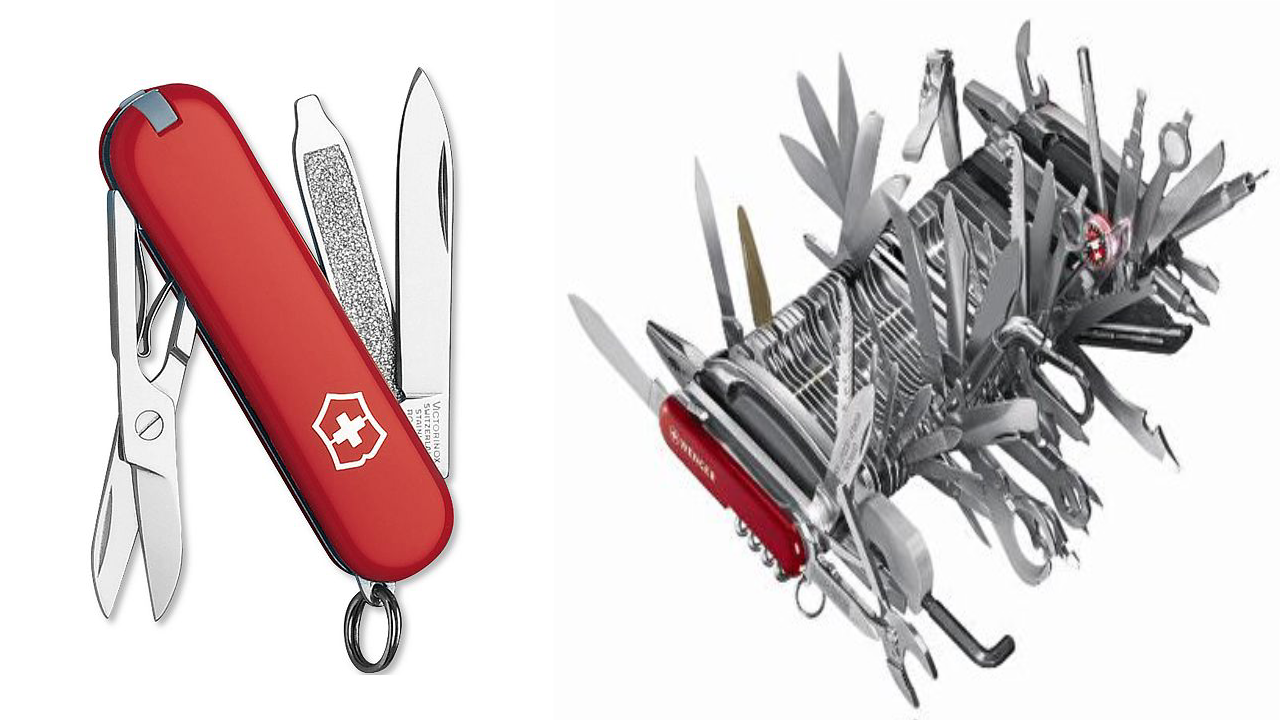 The least helpful response is “it depends”, because it is often unaccompanied by a succinct assessment of tradeoffs. Worse, you could get a listing of tradeoffs, but it is unweighted, presented as though the tradeoffs were somehow equal. They’re not, and the more context you give, the more obvious the choice becomes.

But I’m here to call out the RHS people as well.

Right Tool For the Job

It wasn’t a subtweet of anyone or anything, just a persistent pet peeve that bubbled through my unconscious that day. It got a surprising response for a throwaway thought, which often means I hit a nerve. (Even a fair number of quote tweets!)

Of course, you can take this in the most trivial sense: the number of solutions out there is vast, and your time is limited, of course you can’t learn everything. Duh, you can’t know infinite tools. Don’t you remember How it feels to learn JavaScript in 2016?

Of course, that’s assuming you are able to assess what tools are “right” for you…

Of course, you can take this in the most trivial sense: we are pretty bad at evaluating tools anyway so we should stop pretending we can. FWIW, I don’t actually believe this. Trial runs often suss out tool choices very quickly. However we will still make mistakes, because whether or not the tool ends up “right” involves some amount of predicting the future. False positives and negatives will be made.

What I think is even more pernicious is the idea that the “right” tool wins all debate, end of story. Of course, if you have an expansive definition of “right”, this is a truism. But often we have critical factors that don’t get considered properly:

This is super nuanced. Insisting on always going with the “right” tool, for a common definition of “right”, means taking on a huge amount of churn risk and cost. Insisting on always sticking to legacy and familiarity, however, also risks technical debt and a slow decline to irrelevance. The “right right” lies somewhere in between.

4. Everyone agrees on the job

Too often we end up compiling feature checklists between the consideration set of tools and going for whichever has the most green - and forget that most of the things on the checklists we don’t even need or care about nor have we verified actually works the way we hope it does (which, in the final analysis, is the same thing). This is a very tool-focused approach - we’re dealing on their terms (often literally, based on bullet points from the pricing page).

Instead we could perhaps try to identify the 2-3 things the tool absolutely must get done. This is a very “us”-focused approach - getting clarity on what we want before letting people tell us what we want.

If internal discussion is chaos: External ones are going to be worse. Even asking well-meaning friends what the “right tool for the job” is, involves them understanding what the job is on your behalf. Not impossible, but too often taken for granted.

I feel like this one is kinda self evident. Sometimes the “right tool” is beyond your budget (which, again, depending on how you define “right”, disqualifies it from being the right tool 😂). Or it could be about familiarity, learning curve, migration cost, whatever. Learning curve is particularly important in my mind - is it better to know how to do everything in one (not necessarily “right”) tool, or to be mediocre in every tool (one of which may be “right”)?

It’s also about the non-existence of perfection - say A and B each have 80% of what you want, but a different 80%. Do you have the capacity to just use both? If no, which 80% do you pick?

Either way, “pick the right tool for the job” is depressingly useless here.

Just a final dig at platitudes. Because “right” is ill-defined, it is hard to disagree with (“Use the wrong tool for the job” anyone?) and often used as “agree to disagree” conversation enders.

This isn’t always true, of course. Laurie Barth chimed in with this great point:

With Laurie’s caveat, I think instead of engaging in meaningless platitudes, we can listen and empathise more, fill in knowledge gaps, and ultimately respect choices people make, while daring to have strong opinions.

Conclusion: Right tools for MOST jobs

I ended the mini-rant with a note: “We can do better” - by which I mean improve discourse on tech choices from unhelpful platitudes.

I think general purpose tools and languages have a strong case here. We often refer to general purpose languages - Python, JavaScript, Ruby, Java, C++, etc. - as “glue code” - tying together various API signatures and scheduled work and munging data shapes to make the machine run. But a tool that is general enough is basically the exact same way as a language.

People who use general purpose tools liberally are often criticized: ”When you have a hammer, everything looks like a nail“.

I guess I’m arguing for everybody to have a small range of hammers for the various jobs they need to do.

You may laugh at the horrendous inefficiency of using Excel to write a pricing and risk management system for an 8-figure-revenue interest rate derivatives business, but that’s exactly what I did early in my finance career. Of course we should’ve hired developers and written it in the “right” tool or language. But we didn’t have that time or resource. So that’s what I did. We shipped it. It worked.

Now swap “Excel” for “React” and “pricing and risk management system” for “static site”. Or something else used “inappropriately” for some job in some context you think you know better than the person who did it. You see what I’m getting at?

There’s also the reality that jobs change over time. No matter how clear we are on them now, requirements will change (often after the big rollout or migration) and we need to factor in flexibility and portability as an intangible requirement of the systems we create for ourselves. General purpose tools are better optimized for change in this respect.

This essay has been expanded in another essay: Good Enough