with Honeycomb and Netlify Functions

But this only tells you the how - let’s talk about the why.

In my own words, it’s about giving yourself/your team the power to answer open ended questions about how your app behaves in production. Not just obvious stuff like when errors occur, but also subtle UX-research-ey stuff like “How do employees and users use our tool differently and why?” - a great story covered in Emily Nakashima’s talk at O11yCon. I won’t go further into how Observability differs from Monitoring and the Metrics/Logs/Traces data types - Charity definitively covered that in her post.

Observability, as described, is a high bar - higher than we’re used to. But notice none of these issues are technically restricted to the backend.

Probably some tools come to mind - LogRocket, Sentry and BugSnag mainly because of their generous sponsorship of frontend dev podcasts. For other frontend devs, maybe you’re told to send events and logs to Google Analytics or Mixpanel or report metrics to Datadog or Splunk or New Relic. For UX research you might use FullStory or Heap or Hotjar.

Maybe you pay for multiples of these, but thats kind of the problem - you’re paying to store disparate bits of the same data in multiple places, all disconnected to each other and unhelpfully siloed.

Honeycomb doesn’t have a monopoly on Observability, but it certainly is investing heavily in customer education around the idea that you should have a single source of truth for all these events, and to aggregate these events into metrics, logs or traces on demand instead of pre-aggregating and losing all granularity.

It’s difficult for me to comment on all these tools mainly because I don’t have experience with most of them. It really depends on what kind of company you work at and what you already use.

Observability is more about the mindset that instead of setting alerts to tell you when stuff you expect to go wrong goes wrong, you should instead be in constant conversation with your code, getting a good gut feel for how it works in production, and instrumenting so that you can answer questions you don’t even have yet.

If you’ve ever felt Log-o-phobia (the fear of looking at logs, which I just totally made up), it could be because your systems don’t help give you enough information to reconstruct the sequence of events after the fact. What if instead of being afraid of your tools, you got a dopamine rush from having everything you need to figure it out fast?

Most of this is straight up verbatim from Emily’s talk at O11yCon, which you should definitely go watch, but I’m just listing them here for the sake of completeness.

I think there is room to evolve here. As we discussed in our chat, Frontend Developers think more in terms of Sessions. We had some debate over what a session is - In my prior experience I’ve defined them as contiguous 30 minute blocks, whereas Charity was keen on much more tightly scoped sessions, between 1-10 minutes, since a lot of tracing happens during that session and it gets very wide.

There’s no hard and fast rule for what you put in an event - at the end of the day you’re just trying to give your future self/your team the best possible chance of figuring out the internal state of your app when the observed behavior is going on. But, for example, you might imagine it is useful to tie together page load and unload events, or to track what A/B test bucket the user is in, what permissions they have, what browser they use, and so on.

Here’s a full list so you get an idea:

That’s just the baseline - you can go on to create custom derived metrics out of your events to figure out things like how long it takes your users to do certain key actions and why they fail (see Rachel Fong’s great story in the O11yCon talk). You can create great metrics like detecting Refreshes or Rage clicks.

I will say this is where Honeycomb doesn’t do a great job yet - it is common for frontend-focused tools like LogRocket to offer Rage click detection out of the box, whereas in Honeycomb you’ll both have to instrument and devise a query for detecting this. But once you make a query, it’s trivial to share and reuse it, and I’m sure Honeycomb will look at building it in someday.

See this in action

Here is where you should really check out my Proof of Concept if you’d like to see what the code looks like. All this work takes place in two commits:

Personally I like the idea that most of the time you just work with an anonymized/double blind user ID to do your work, and all the deanonymizing information is kept far away under someone else’s lock and key.

I think we could do a lot to make our CLIs and browser extensions and language servers and dev servers and everything else more observable. The key difference is we’re exposing this data to the users, rather than just the developers of the tools. They can then choose to send this data to us alongside bug reports or we can provide them tools to figure out their own problems on their own from the events logged therein.

In my chat with Charity, she mentioned that Intercom’s engineers had instrumented their own CI/CD pipeline this way, to figure out why their builds can go wrong. I think this is an excellent idea and we’ll likely need different thinking and data structures to tackle this user-facing observability.

If you’d like to hear me grill Charity more on Frontend Observability, have a watch! 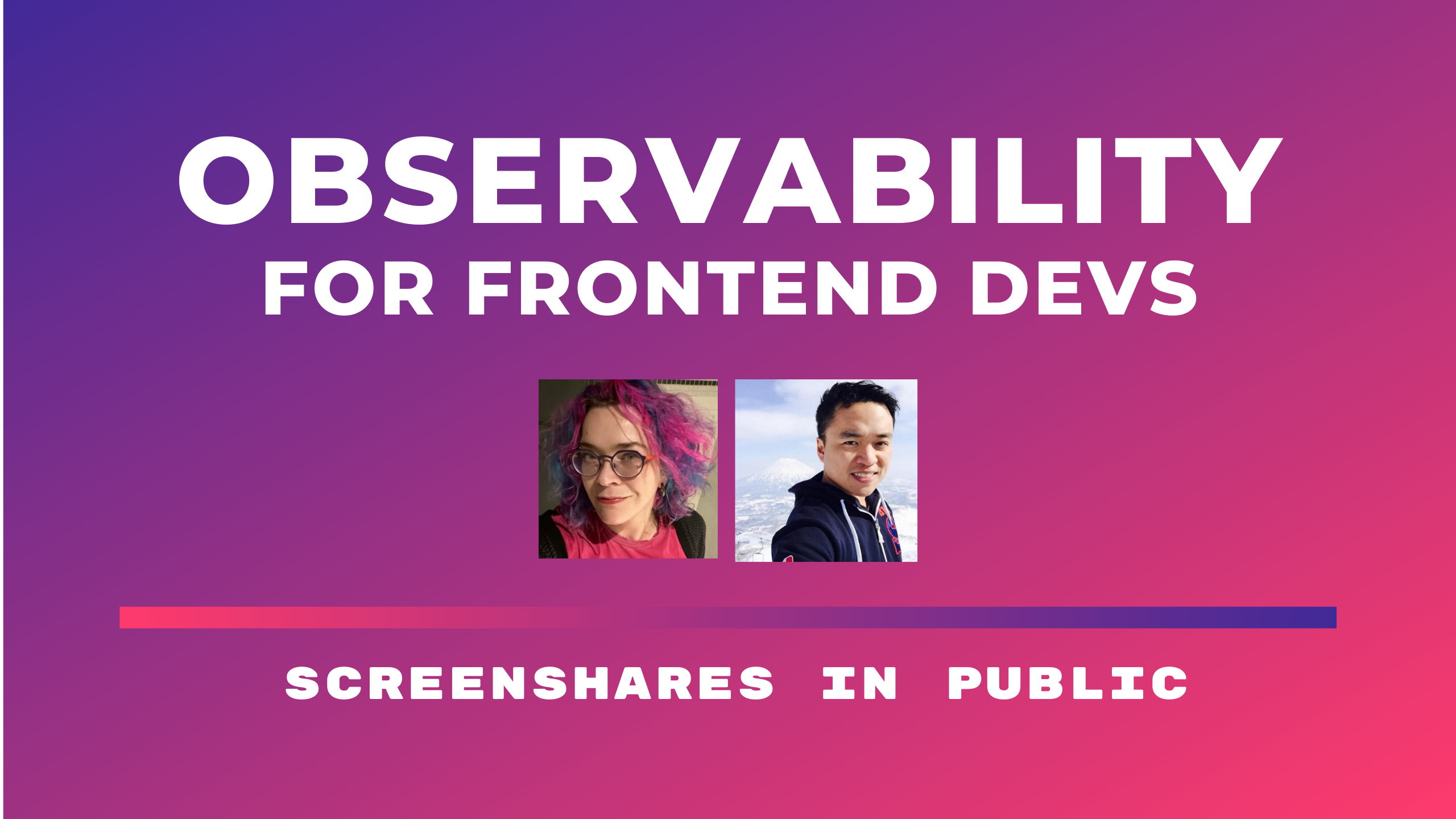