Why do Webdevs keep trying to kill REST?

The epic client-server battle of our time

How I broke out of the tiresome REST vs GraphQL debate - by realizing that the real battle is between Smart Clients and Smart Servers! #react #graphql #rest #supabase 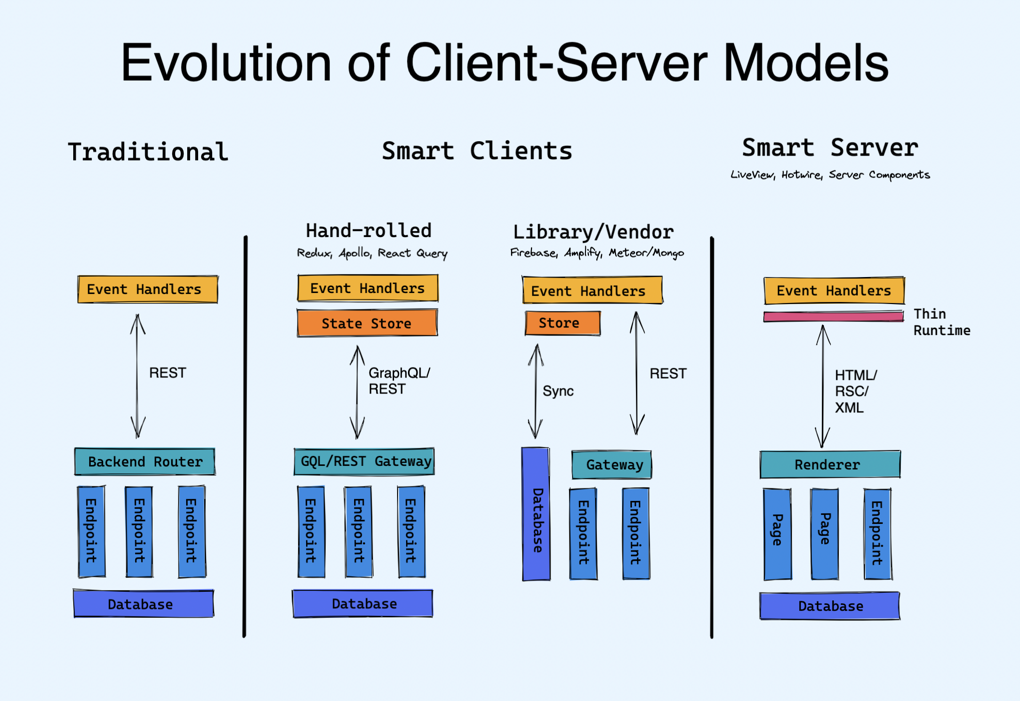 Watching recent trends in client-server paradigms, from Apollo GraphQL to React Server Components to Rails Hotwire, I've had a revelation that helped me make sense of it all: They're all abstractions over REST!

There are two schools of thought:

Of course the "Smart Server" paradigm isn't wholly new. It has a historical predecessor — let's call it the "Traditional Server" paradigm. The Wordpress, Django, Laravel type frameworks would fill out HTML templates and the browser's only job is to render them and send the next requests. We gradually left that behind for more persistent interactive experiences with client-side JS (nee AJAX). For a long time we were happy with just pinging REST endpoints from the client, ensuring a clean separation of concerns between frontend and backend.

So why are we tearing up the old client-server paradigm? And which side will win?

It's about User Experience

Ironically, the two sides have very different goals in UX and would probably argue that the other is less performant.

The "winner" here, if there is such, will depend on usecase - if you are writing a web app where any delay in response will be felt by users, then you want the smart client approach, but if you are writing an ecommerce site, then your need for speed will favor smart servers.

It's about Developer Experience

Both smart clients and smart servers greatly improve the DX on all these fronts.

Better protocols lead to improved UX (eliminating user-facing errors and offering faster updates) and DX (shifting errors left) and they're so relevant to the "why are you avoiding REST" debate that I split them out to their own category. Technically of course, whatever protocol you use may be a layer atop of REST - if you have a separate layer (like CRDTs) that handles syncing/conflict resolution, then that is the protocol you are really using.

A lot of these comments will feature GraphQL, because it is the non-REST protocol I have the most familiarity with; but please feel free to tell me where other protocols may fit in or differ.

There remain some areas for growth that I don't think are adequately answered yet:

Yes of course my title is a little clickbaity; REST is perfectly fine for the vast majority of webdevs. There are even people pushing boundaries within the REST paradigm.

Rich Harris recently gave a keynote at Jamstack conf that framed his take on this issue (TLDR here):