I broke past 10,000 Twitter followers on Saturday. Obviously this is a completely arbitrary milestone and pretty minor in the hierarchy of needs. I’m not celebrating.

A person that -only- values follower count is playing the game Twitter wants you to play, as Eugene Wei would say, mining the currency they monetize for social status. I don’t think I know how to play this game well, although I clearly do it better than some.

This won’t be a full retrospective; I first signed up for Twitter 9 years ago, but only started actively using it 2 years ago and things have changed a lot since my early days. More on my Twitter Rules of Engagement in a future post. 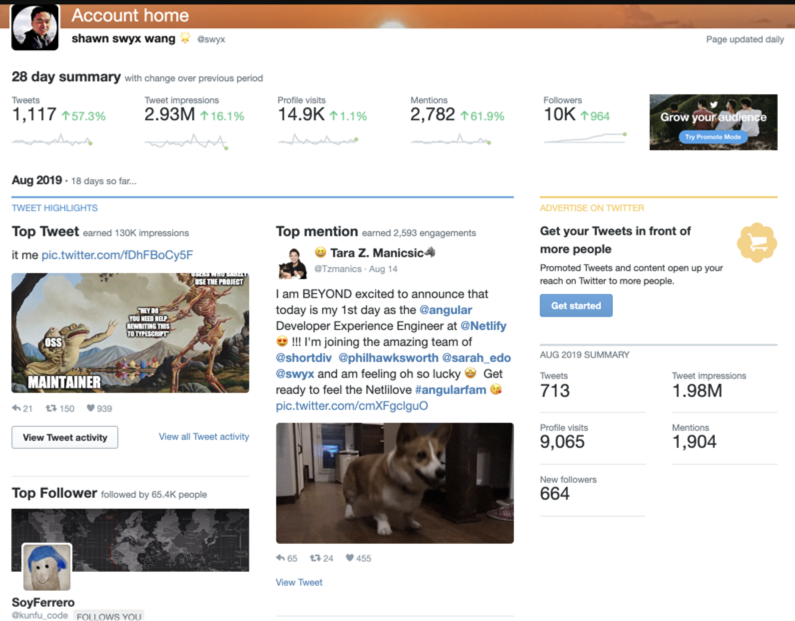 It’s better to get an idea of a full month, so looking at July:

My top Tweets are usually memes like this or parodies like this or technical stuff like this. Basically I don’t have much of a pattern apart from something vaguely technical although I did have one recent notable exception outside my usual beat, which were literally just pictures of Singapore.

For better or worse, I don’t do any of that. I value anecdotally experienced engagement from people I respect. This doesn’t mean they have to follow me at all. It just matters that I have the ability and the credibility to reach out to someone when I need to and I pass the “Is this rando worth my time” test. (How to make it worth their time? Learn in Public.)

I wasn’t planning for this but I recently felt this sheer awe in a recent tweet. I was thinking through a modal interaction I’d implemented before and see all over: 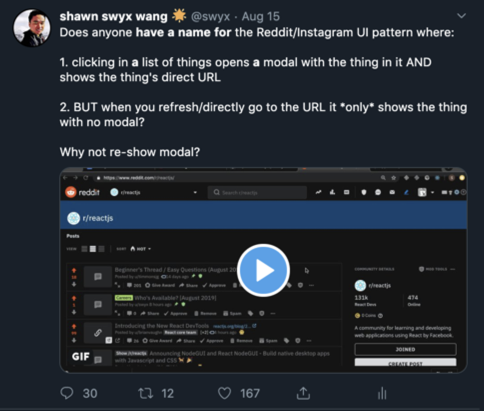 I simply tweeted that because it was something I was working through and didn’t know. To this day I don’t know what kind of response any individual tweet will get.

As awesome as that is, Twitter DM’s are even more valuable. That is a level of intimacy on par with and sometimes higher than having someone’s number to text back and forth. I got my current job through a Twitter DM, and continue to get an enquiry around once a month. Other backchannel conversations and the rare group DM are also very valuable. (Twitter DMs are inferior to other group chat solutions like text and Whatsapp in every way but one: they’re native to the platform.)

This is the kind of thing I’m on Twitter for. A hive mind of people with way more knowledge and abilities than I will ever have, that can help me and that I can hopefully help someday.

The bitesize and free nature of Twitter belies its importance. If the number one feature of a social network is the people already on it, then Twitter has that on lock as far as developers are concerned (arguably GitHub is more valuable despite only being acquired for \$7b!). I challenge you to find a single conference where speakers don’t mention their twitter handles. I challenge you to find any other social network mentioned.

Yet business founders, even of technical businesses, regularly advise that email is more valuable. I believe they’re right for certain types of content, like email marketing and long essays like this one you’re reading right now.

But Twitter has value in its constraint. By limiting every tweet to 280 characters, they force some clarity and economy and in turn make the infinite-scroll-feed more valuable and palatable. (By the way: there are very easy hacks to get disproportionate attention for your tweets I should probably write about someday. But it definitely doesn’t involve a million hashtags.) Fail to encapsulate important nuance and face wrath from the mob.

By “selling out” to Twitter’s requirements, you help add value to Twitter, and Twitter in turn gets you the distribution you want to other people, and by their interaction, adds value to you. Your Twitter followers are fans of yours, but only loosely. Their fanhood is (implicitly) conditional upon and improved by you following The Format and your reward for behaving is getting more notice faster.

Loose Fans and What I’m Doing About It

Kevin Kelly famously wrote about how far you can go with 1000 True Fans. It’s about “true” fandom, but also about how you can make a living serving the long tail, which is very true.

Twitter followers are “loose” fans. They haven’t paid for anything from you, they haven’t opted in for “your whole self” or pictures of what you had for Sunday brunch, they have simply opted to follow you to improve their main feed or keep tabs on something you’re doing that is relevant to their interests. (There are also ways to modify this, via lists and muting, that I should write about in future.) It’s very hard to call them to action mainly because you’ll never be sure if they even see it. Them’s the shakes.

Many aren’t even really “fans”. They may be there just to try to prove they’re smarter than you or to endlessly nag or stalk you. This is especially obvious at higher follower counts. This is part of why I don’t relish the thought of 10xing followers, because although it will probably open up more opportunities, it will take away a lot of what I enjoy about my current Twitter experience.