In this post we’ll briefly review the “Literature of Luck”, and then I’ll end with some personal thoughts on how it could be extended. 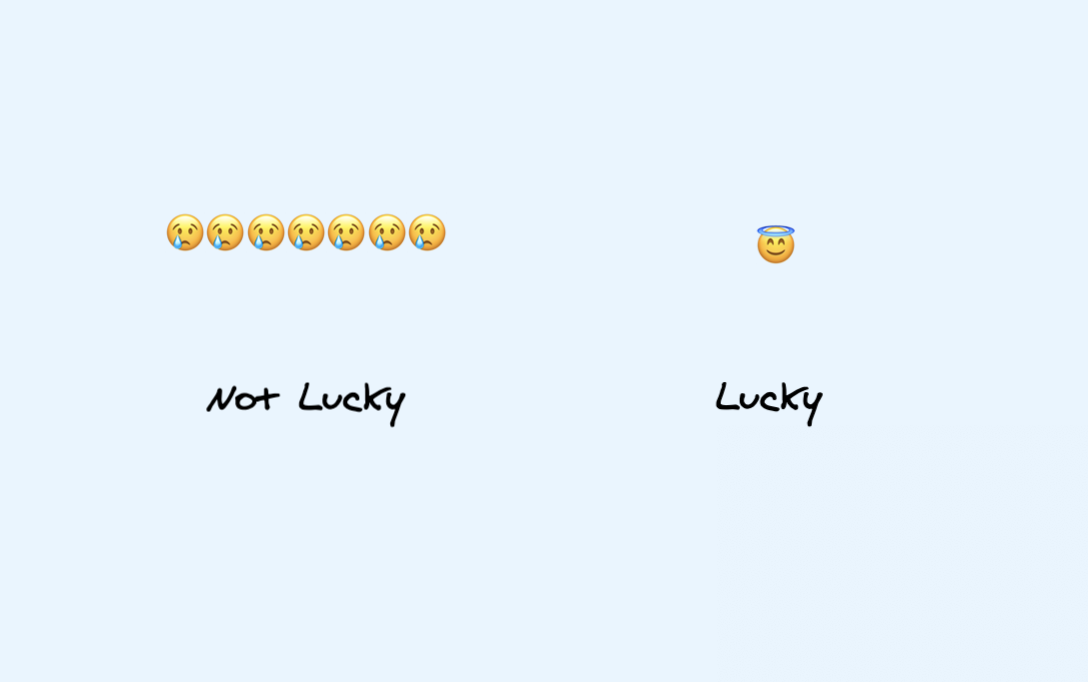 The closing question of every episode of Guy Raz’s How I Built This podcast asks successful people: “How much of your success is due to skill, and how much is due to luck?”

Those who believe in their own agency answer the former. Others - who’ve seen people smarter and harder working than them fail - answer the latter. Those who are politically correct cop-out with the half-and-half.

It can be comforting to subscribe to the binary luck model. If you just got a bad roll of the dice, there’s nothing you could do. Your lack of success is not your fault.

Jason Roberts coined the term ”Luck Surface Area”, and it was expanded by Sean Murphy and popularized by Patrick McKenzie.

I liken this model of luckiness to a “catchment area” (a term from urban and hydrological geography). Luck is still randomly occurring, but you can position yourself in a way that captures more of it: 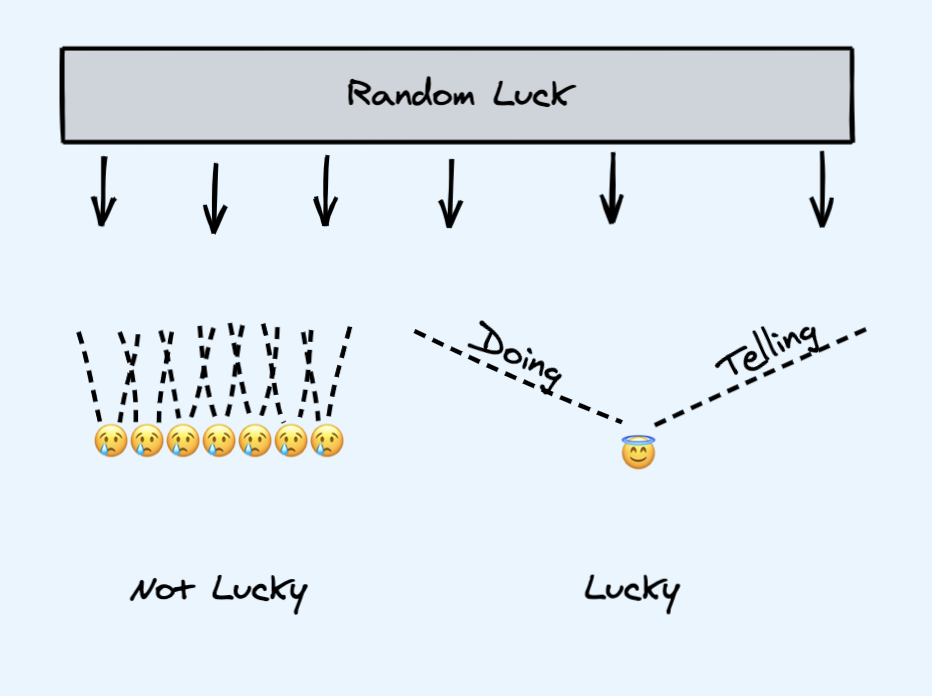 Jason has a really simple model of how to grow your LSA - do more things, and tell more people about it. Doing and Telling. Already this embodies a more active attitude toward how you can orient your life for more positive random events. It’s ”Fixed vs Growth mindset” adapted for luck.

2021 update: a reader visualized the LSA concept with this fancy video!

I’ve quoted this many times to friends and always had trouble remembering what the 4 types are. I gave it some thought and visualized/organized it as such: 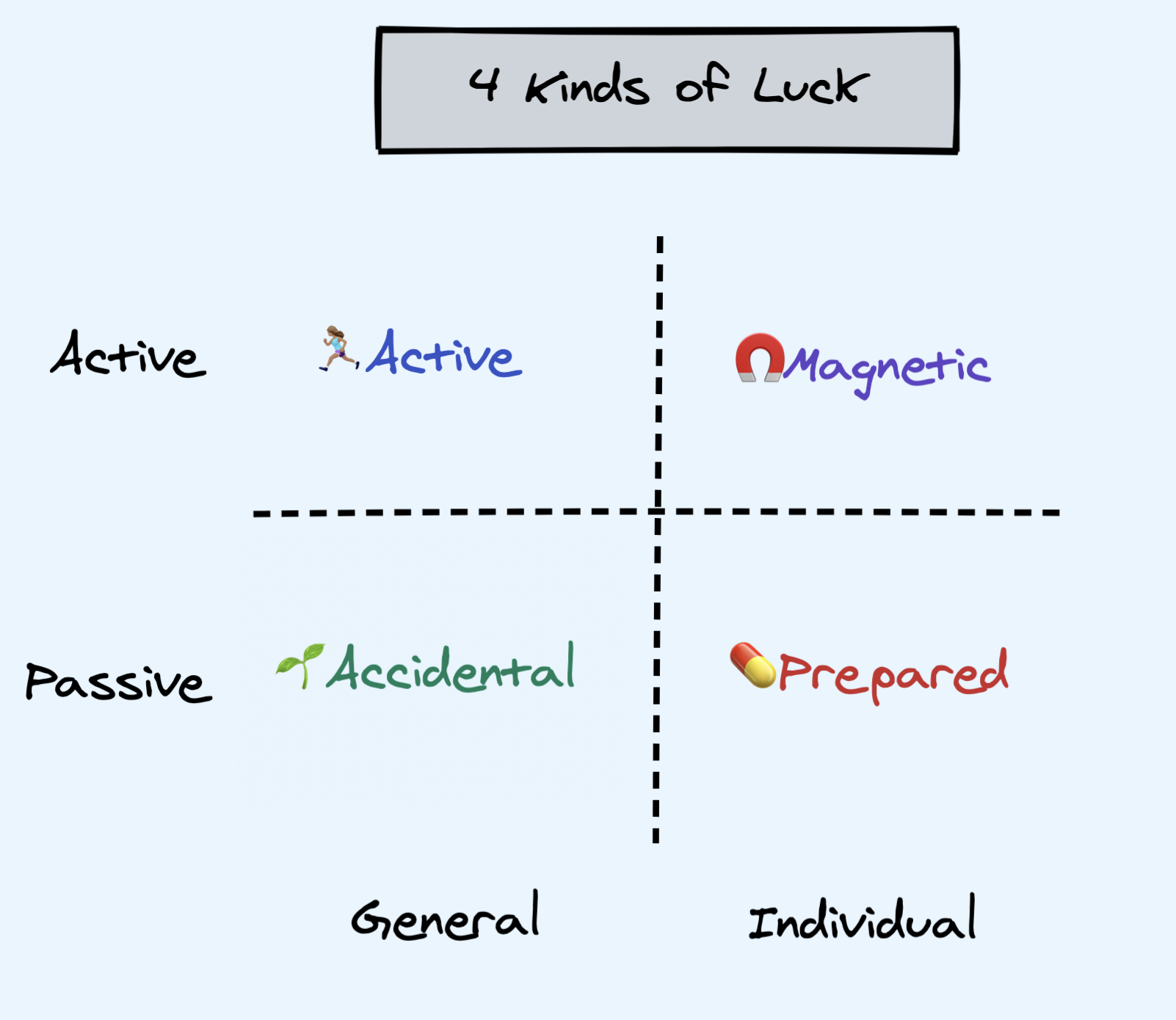 I find the 4 of these hard to remember, so I’ve organized them along two axes - active vs passive, and general vs individual. The first axis is the same realization as “Luck Surface Area” - you actually have the power to do things to create more luck than you were given.

I of course find the Four Kinds of Luck very appealing, since I’ve quoted it so much to friends that I’m writing this post at all. But upon closer reading I think there’s a slightly different direction that is unaddressed by the Four Kinds (I originally thought this was embedded in the Four Kinds, only to discover that it wasn’t in the source material and I had completely read my own thinking into it). 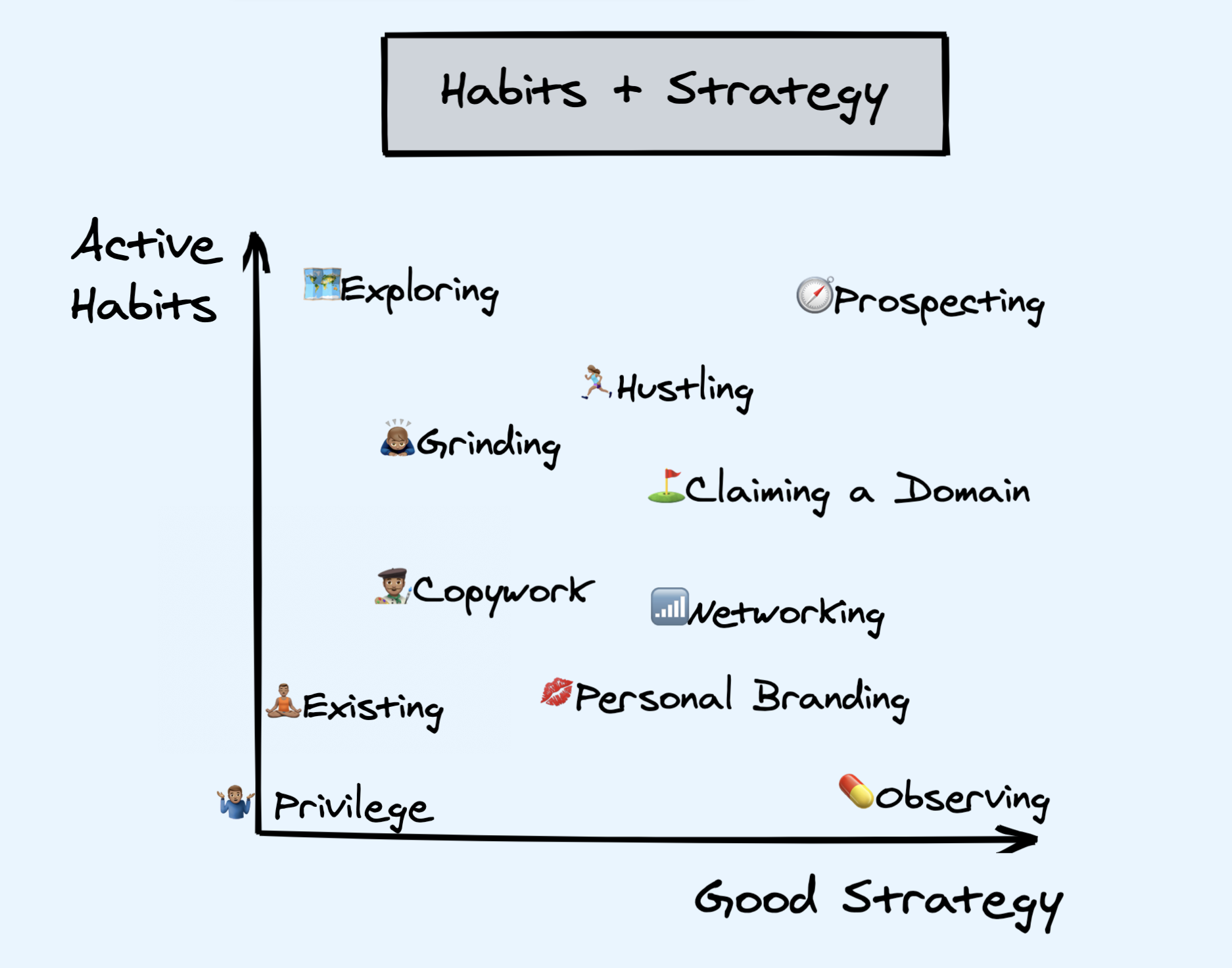 This model differs in two ways. It treats both axes as a spectrum rather than a 2x2. It also focuses more on actions (you can take) rather than classification (which are a little more abstract). I’ve also swapped out “Active vs Passive” for “Active Habits” and “Individual vs General” for “Good Strategy”. So my version is more about HOW you get more lucky. It’s not very actionable to be “more magnetic”, but you can Claim a Domain or Hustle and have a good sense of what those things entail.

I’ve written about a few of these ideas in prior posts so I won’t elaborate:

Exploring (and to a lesser extent Grinding and Copywork) are Actively Habitual, non Strategic activities. But this doesn’t mean it is bad. I think this is what you do when you take in general life and career advice and apply them to yourself. You know there are a list of Principles which are just generally good things to do in life, and trust that you will do well if you do those things (e.g. Learn in Public). Keep doing the “right” things, and “trust the process”.

Prospecting is a term I’ve borrowed from the oil exploration industry. Prospecting is a highly Active habit, and highly Strategic. These days, when you look for oil, there is a whole science to handicapping whether or not a plot of land is likely to have oil. You don’t know it for a fact, all you’re doing is estimating probabilities. Not to get too tautological, but you will be luckier if you can consistently assess and move towards areas where you are more likely to be “lucky”. It might look like luck to others, but the motion and intention you invested to get yourself in a position to be lucky was far from random. I’ve also written many times about how I think strategic manoeuvring for “Megatrends” is a good idea. 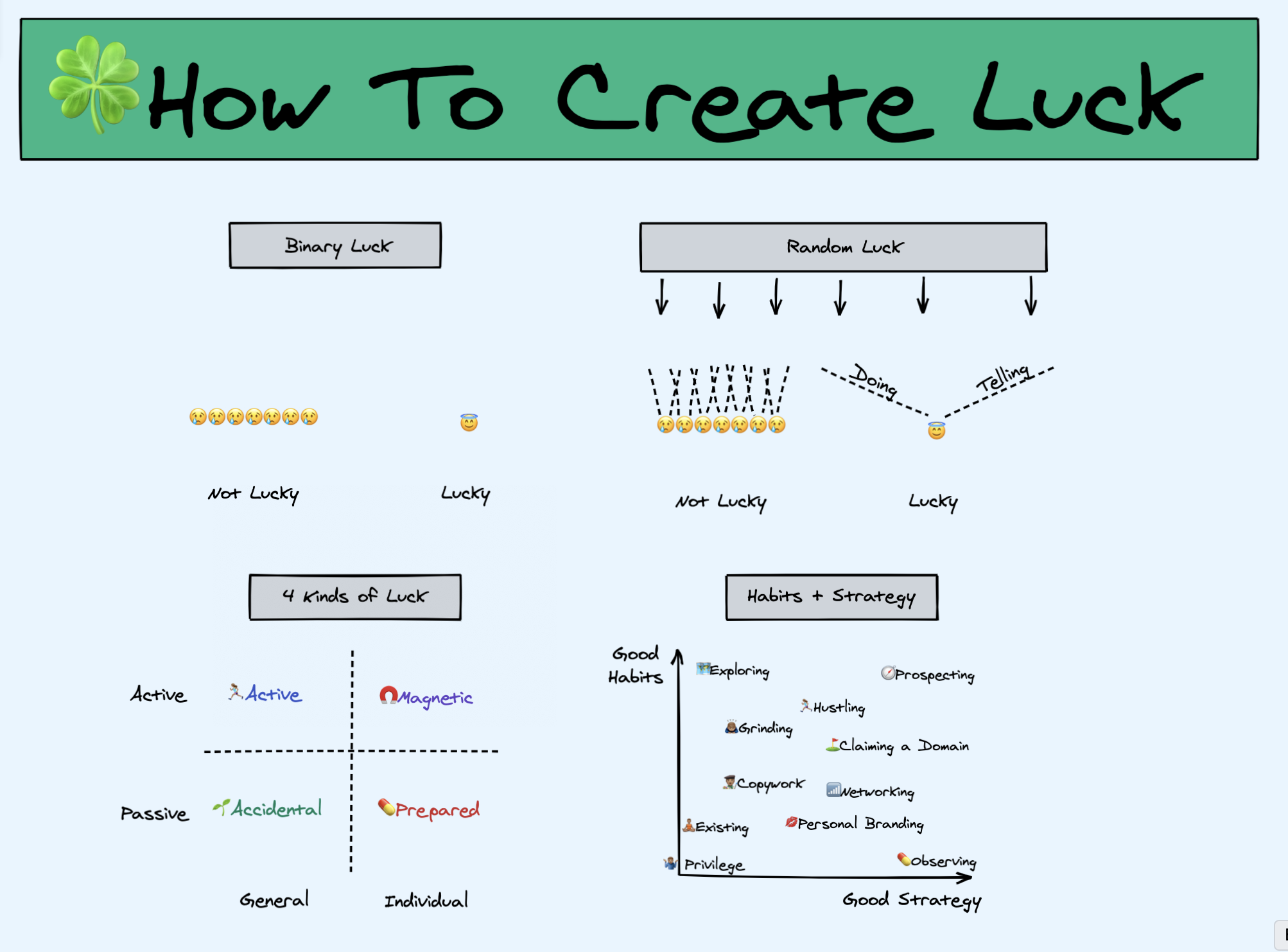 But overall, the message I really want to leave you with is this: you can create luck. That’s it. I don’t care how you do it, what mental model you use, who you quote. I just care that you do it. Go make yourself more lucky.

Ordinarily I’d wish you good luck, but now you have something better than a mere wish 😂