Lessons in Competitive Comms from the Plaid-Stripe Kerfuffle

Now that the dust has settled on the Plaid-Stripe thing (initial news and its HN discussion, retraction, response from Stripe), I wanted to take up Shreyas’ call to his Twitter Super Followers to learn lessons from this episode, not as a form of criticism of Plaid OR Stripe, but simply as practice/exercise in second order thinking. 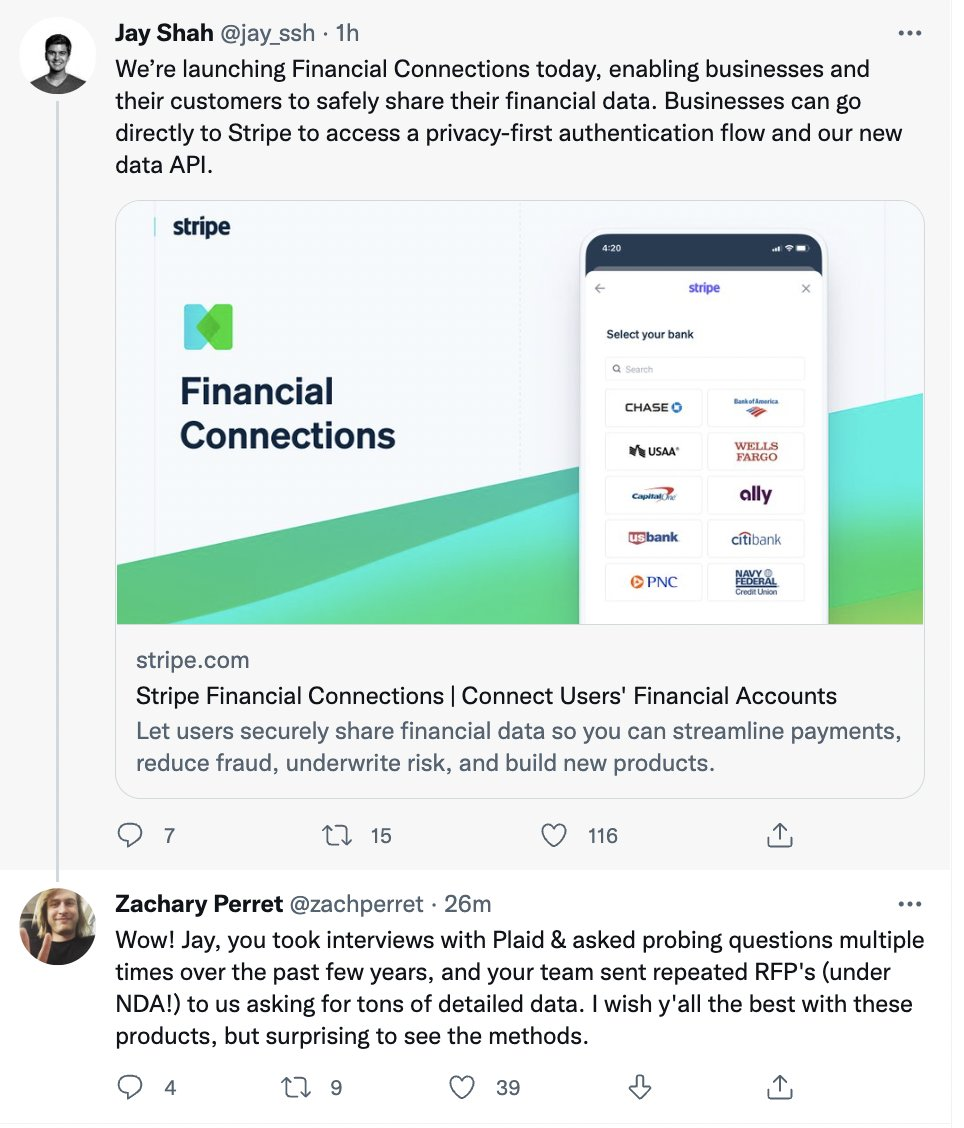 This sort of “competitive comms” recurs throughout history - Slack vs Microsoft Teams, Apple vs IBM, Sourcegraph vs GitHub. If you are at all successful at working on something valuable, expect competition, and expect to have to handle it gracefully in public.

I found this a very useful exercise and figured I would write stuff down as a reference for myself. This isn’t armchair quarterbacking - I view this as something I might have done - so I am eager to “review the tape” so to speak.

Assuming the facts of the matter were accurately represented by Zach (seems unlikely now), he could have backchanneled his complaints to Patrick first, who from all appearances could have shut down this program if it were truly tainted by bad faith. Misuse of confidential information would have been enforceable under NDA as well. Either of these could have led to a private settlement that was ruled out by public tweeting.

In the extremely likely chance that he was not going to have any impact (such as Stripe publicly reversing course/shutting down its launch) then all he was going to do was just tweet words to a small group of extremely-online Twitterfolk. In that case, he should have tried to go for a humorous take, highlighting Plaid’s strengths (from being in this game longer), rather than starting drama that would have gone nowhere and just reflected badly. Highlight the differences, not the similarities, on things the buyer cares about.

For a “funny” take on being cloned I like thinking about how Ricky Gervais talks about the US version of The Office.

The actual “bad look” here is that Plaid seems to be admitting they disclosed way too much valuable information during the interview process.

(Other words used to describe this were: “lack of maturity”, “not being intentional”, “optics of CEO attacking a PM”

Most of these have to do with induced paranoia.

The “loss” by Plaid (because Stripe had the last word) also further eroded confidence in Plaid’s leadership.

There were some responses I did not agree with: