This week in a Svelte Radio recording, @rich-harris commented that something I said was “uniquely swyx”: an offhand observation that “we are all professional streamers now” [^1]. I responded that I’ve been calling this behavior “barbarianism” - you can listen to the full explanation when the episode drops in future.

The concept of “barbarian” comes from the excellent Alex Danco piece, The Michael Scott Theory of Social Class: 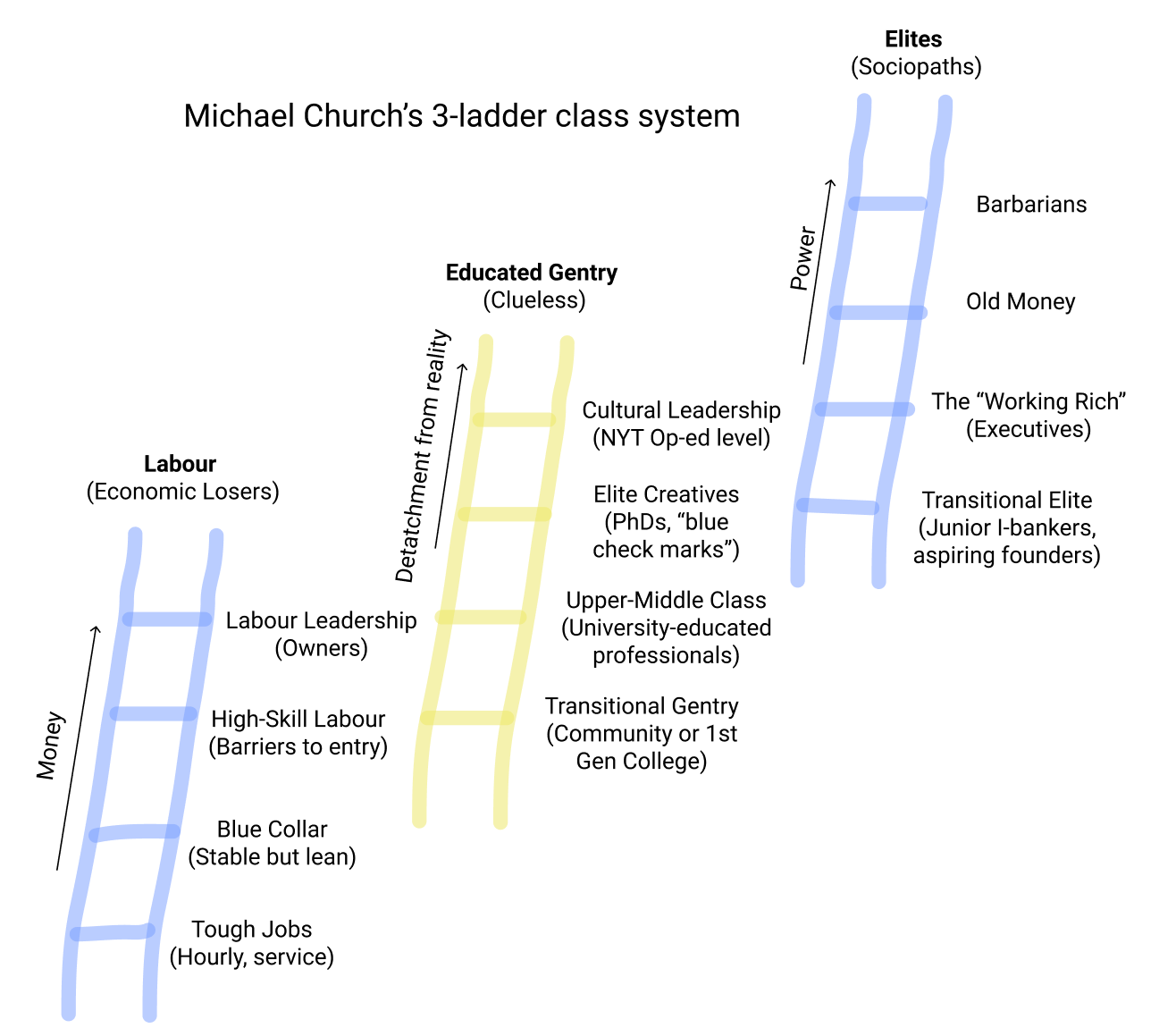 Several years ago, Michael Church wrote a neat summary of the American social class system, and how the traditional metaphor of “climbing the ladder of social class” is wrong in an important way. There isn’t one single ladder; there are three – each with different values, norms and goals. You have the first, and largest ladder, Labour. Next, you have the “Educated Gentry” ladder that corresponds to what we typically call the Upper Middle Class. And finally, you have the elite ladder. And the remarkable thing about these ladders is how perfectly they correspond to the three-tiered pyramid in The Office, of the losers, clueless, and sociopaths.

The bottom of this ladder is an entry point – junior Investment Banker roles you can jump into, or founding a startup now also qualifies. The next rung up are the executives who run successful businesses. They are powerful, but nervous. Above them is Old Money: the multigenerational dynasties with power that extends beyond business and into media and politics, like the Bushes and extended Vanderbilts. And finally, at the top of this ladder, are the Barbarians. These are the scariest people in the world.

Barbarians are Shaw’s Unreasonable Men living Thompson’s used up, worn out life. They are politicians, kings, innovators, pioneers, troublemakers, dictators, criminals. Being a Barbarian is not strictly an aspirational thing - I am not complimenting this behavior in any way. But I think learning about extremes helps open up minds that may not know they are closed.

And if you don’t know about the Barbarians, you almost definitely have a more closed mind than you know.

Barbarians famously do not respect borders. They reject your socially constructed names for things and artificial divisions between concepts - instead they look at what is really there - the natural, real, landscape of hills and valleys and rivers and fields - make plans for what they want accordingly, and go out and get it (famously, with some regrettable collateral damage). Instead of getting into meaningless debates over whether something is called a library or a framework, they understand what it does and how it works, and bulldoze their way toward their goals.

I am a Barbarian of good ideas. I don’t particularly care if the idea comes from math or physics or economics or biology or computer science - if it makes sense given one set of assumptions the internal logic can be generalized to more fields than one. This is why I often talk about making technology choices in my tech career using lessons I learned from my investing career, or taking lessons from my indie creator career to my developer relations one.

I think the baseline discipline you need to have to Be Barbarian is philosophy, not math or science. A longer discussion on this is on an upcoming InfoQ podcast but when you think from first principles and learn about epistemology you naturally end up being more of a Barbarian than people who learn by analogy and take things as they are presented. A good number of Barbarians are self styled philosophers - George Soros was one of the greatest hedge fund managers of all time, and yet he arrived there by an absolutely bizarre path studying Karl Popper, NOT by getting a CFA or doing 3 years in corporate finance at a bulge bracket investment bank.

Steve Jobs, who spent a year seeking spiritual enlightenment in India and so on, had this famous saying about the “secrets of life”:

When you grow up, you tend to get told that the world is the way it is and your life is just to live your life inside the world, try not to bash into the walls too much, try to have a nice family life, have fun, save a little money.

That’s a very limited life. Life can be much broader, once you discover one simple fact, and that is that everything around you that you call life was made up by people that were no smarter than you. And you can change it, you can influence it, you can build your own things that other people can use. Once you learn that, you’ll never be the same again.

And the minute that you understand that you can poke life and actually something will, you know if you push in, something will pop out the other side, that you can change it, you can mold it. That’s maybe the most important thing. It’s to shake off this erroneous notion that life is there and you’re just gonna live in it, versus embrace it, change it, improve it, make your mark upon it.

In Shaan Puri’s words - life is more malleable than you think.

I’ve also been catching up on Better Call Saul recently in anticipation of the series finale, and this scene with Hector Salamanca is a perfect (if unpleasant) dramatization of how a Barbarian moves through life:

And of course, Better Call Saul tells a lot of the backstory about Hector’s lifelong feud with Gustavo Fring, a more dangerous Barbarian due to his ability to dissemble by playing on two of Church’s ladders at once. Both of whom are upstaged by Walter White, the biggest Barbarian of all in Albuquerque.

These are the beliefs and behaviors of the Barbarians. You may or may not subscribe to them. You may use them for good or for selfish gain (or both). But you should not go through life without knowing they are real. 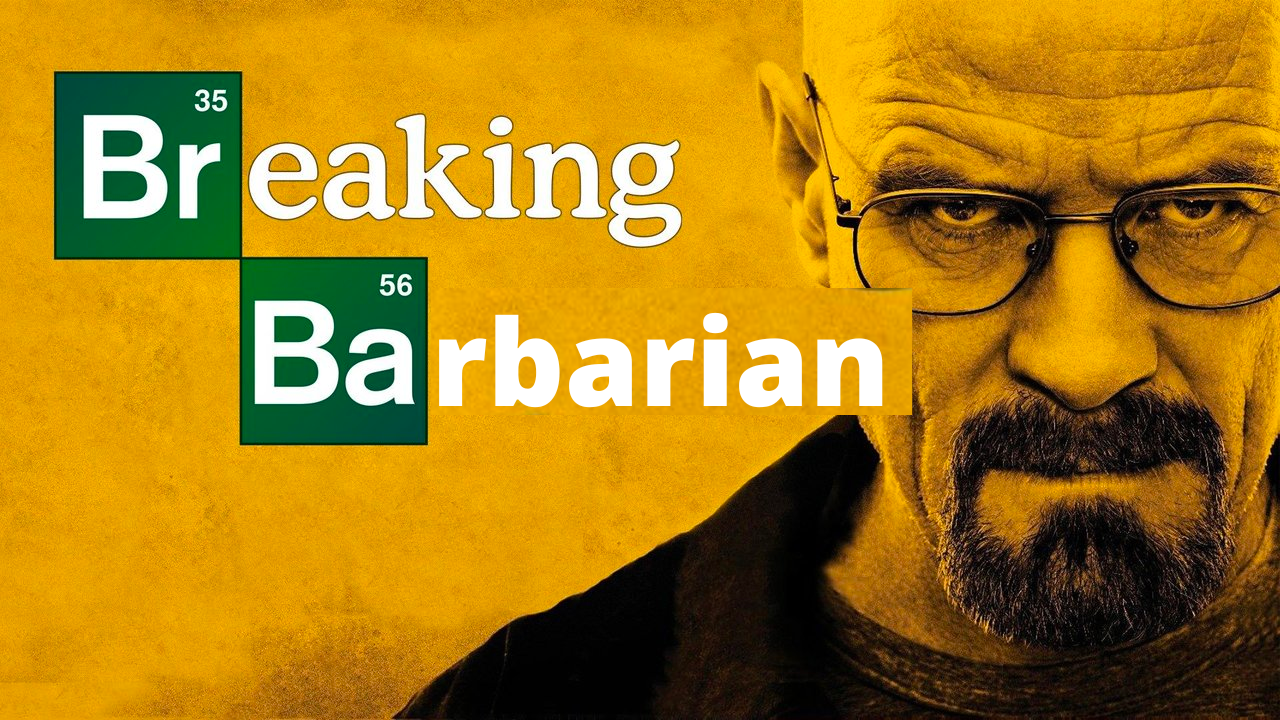 [^1]: Abstractly, most of us who work remotely make money by sitting down in front of a table, have our cameras on, speak extemporaneously, and making computers go beep boop, just like gaming and coding streamers. Particularly as a manager of a team now, every meeting I run is basically livestreaming information, and should be entertaining enough to hold interest. It stands to reason that we should explore using the tooling of professional streamers in the workplace, because they have so many years of experience on us. The first wave was hardware - getting better microphones and cameras, the next wave is software - I described how I am using the Elgato Streamdeck and Rogue Amoeba’s Loopback to sound effect my live meetings to some success at work.